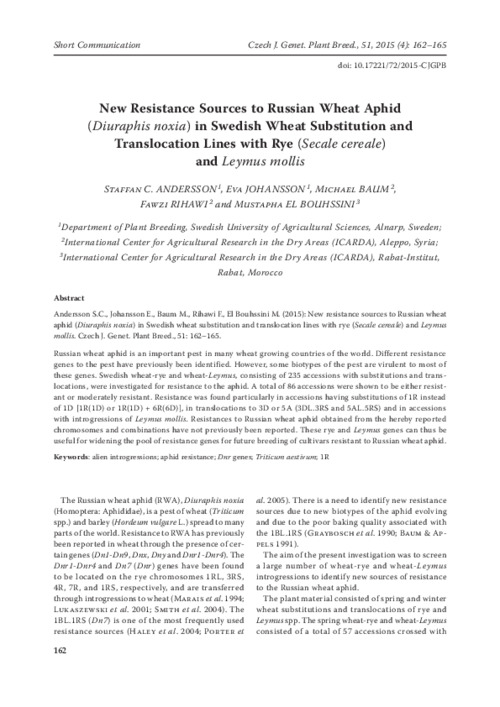 Russian wheat aphid is an important pest in many wheat growing countries of the world. Different resistance genes to the pest have previously been identified. However, some biotypes of the pest are virulent to most of these genes. Swedish wheat-rye and wheat-Leymus, consisting of 235 accessions with substitutions and translocations, were investigated for resistance to the aphid. A total of 86 accessions were shown to be either resistant or moderately resistant. Resistance was found particularly in accessions having substitutions of 1R instead of 1D [1R(1D) or 1R(1D) + 6R(6D)], in translocations to 3D or 5A (3DL.3RS and 5AL.5RS) and in accessions with introgressions of Leymus mollis. Resistances to Russian wheat aphid obtained from the hereby reported chromosomes and combinations have not previously been reported. These rye and Leymus genes can thus be useful for widening the pool of resistance genes for future breeding of cultivars resistant to Russian wheat aphid.