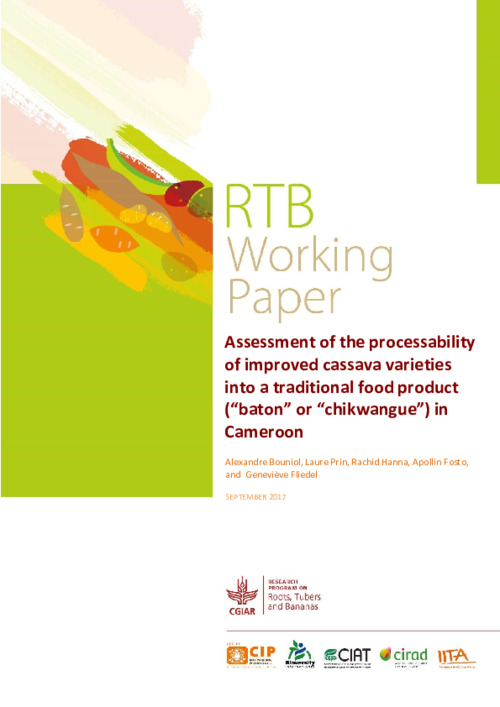 New cassava varieties were developed by IITA in order to improve their agronomic yield, pest and disease resistance, and micronutrient content (higher beta-carotene and other carotenoids). This study assessed the ability of 18 newly released varieties to produce a traditional cassava food product known as “baton” or “chikwangue” in Cameroon’s central region, in order to maximize their chances of adoption by processors and consumers. The successive steps of the traditional process are described in detail, and data on processing yields, material balances, shaping and cooking conditions, as well as production capacity and product quality, are reported. The results showed that “batons” with both better quality and productivity were obtained from varieties with lower fiber content and larger root size. The best profitability was obtained with varieties longer than 25 cm, with a diameter between 6 and 9 cm inclusive and weighing between 0.8 and 1.4 kg inclusive. Additionally, a survey of processors highlighted the desired quality criteria for cassava varieties to make a good “baton”. Eight varieties out of the 18 were ultimately identified as processable into a good “baton”. Their acceptability by a large cohort of Cameroonian consumers will be tested in a further study. Beyond these initial results, the originality of the approach was to assess performance and quality criteria for cassava processing under local conditions, which appears very effective to ensure that improved varieties have appropriate characteristics for traditional uses, and also to integrate market and consumer demands at an early stage into varietal improvement programs.