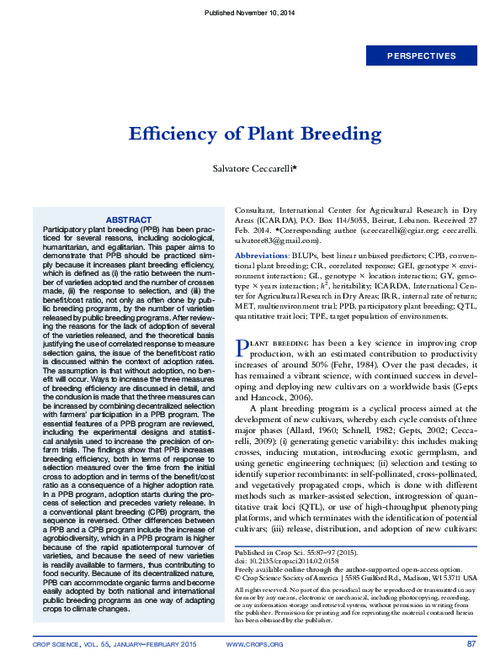 Participatory plant breeding (PPB) has been practiced for several reasons, including sociological, humanitarian, and egalitarian. This paper aims to demonstrate that PPB should be practiced simply because it increases plant breeding efficiency, which is defined as (i) the ratio between the number of varieties adopted and the number of crosses made, (ii) the response to selection, and (iii) the benefit/cost ratio, not only as often done by public breeding programs, by the number of varieties released by public breeding programs. After reviewing the reasons for the lack of adoption of several of the varieties released, and the theoretical basis justifying the use of correlated response to measure selection gains, the issue of the benefit/cost ratio is discussed within the context of adoption rates. The assumption is that without adoption, no benefit will occur. Ways to increase the three measures of breeding efficiency are discussed in detail, and the conclusion is made that the three measures can be increased by combining decentralized selection with farmers' participation in a PPB program. The essential features of a PPB program are reviewed, including the experimental designs and statistical analysis used to increase the precision of on-farm trials. The findings show that PPB increases breeding efficiency, both in terms of response to selection measured over the time from the initial cross to adoption and in terms of the benefit/cost ratio as a consequence of a higher adoption rate. In a PPB program, adoption starts during the process of selection and precedes variety release. In a conventional plant breeding (CPB) program, the sequence is reversed. Other differences between a PPB and a CPB program include the increase of agrobiodiversity, which in a PPB program is higher because of the rapid spatiotemporal turnover of varieties, and because the seed of new varieties is readily available to farmers, thus contributing to food security. Because of its decentralized nature, PPB can accommodate organic farms and become easily adopted by both national and international public breeding programs as one way of adapting crops to climate changes.

adoption; environments; grain-yield; and the conclusion is made that the three measures can be increased by combining decentralized selection with farmers' participation in a ppb program. the essential features of a ppb program are reviewed; articipatory crop improvement; agricultural-research; adaptation strategy; biodiversity loss