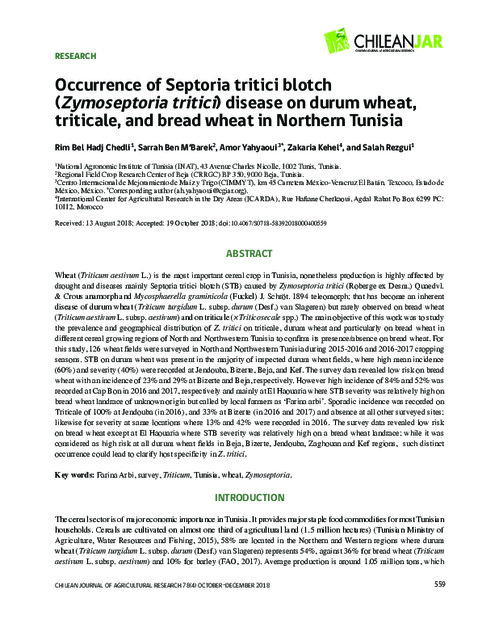 Wheat (Triticum aestivum L.) is the most important cereal crop in Tunisia, nonetheless production is highly affected by drought and diseases mainly Septoria tritici blotch (STB) caused by Zymoseptoria tritici (Roberge ex Desm.) Quaedvl. & Crous anamorph and Mycosphaerella graminicola (Fuckel) J. Schröt. 1894 teleomorph; that has become an inherent disease of durum wheat (Triticum turgidum L. subsp. durum (Desf.) van Slageren) but rarely observed on bread wheat (Triticum aestivum L. subsp. aestivum) and on triticale (×Triticosecale spp.) The main objective of this work was to study the prevalence and geographical distribution of Z. tritici on triticale, durum wheat and particularly on bread wheat in different cereal growing regions of North and Northwestern Tunisia to confirm its presence/absence on bread wheat. For this study, 126 wheat fields were surveyed in North and Northwestern Tunisia during 2015-2016 and 2016-2017 cropping seasons. STB on durum wheat was present in the majority of inspected durum wheat fields, where high mean incidence (60%) and severity (40%) were recorded at Jendouba, Bizerte, Beja, and Kef. The survey data revealed low risk on bread wheat with an incidence of 23% and 29% at Bizerte and Beja, respectively. However high incidence of 84% and 52% was recorded at Cap Bon in 2016 and 2017, respectively and mainly at El Haouaria where STB severity was relatively high on bread wheat landrace of unknown origin but called by local farmers as ‘Farina arbi’. Sporadic incidence was recorded on Triticale of 100% at Jendouba (in 2016), and 33% at Bizerte (in 2016 and 2017) and absence at all other surveyed sites; likewise for severity at same locations where 13% and 42% were recorded in 2016. The survey data revealed low risk on bread wheat except at El Haouaria where STB severity was relatively high on a bread wheat landrace; while it was considered as high risk at all durum wheat fields in Beja, Bizerte, Jendouba, Zaghouan and Kef regions, such distinct occurrence could lead to clarify host specificity in Z. tritici