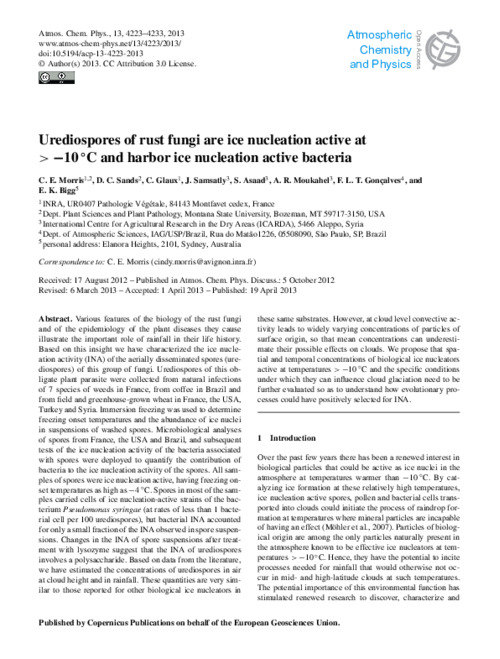 Various features of the biology of the rust fungi and of the epidemiology of the plant diseases they cause illustrate the important role of rainfall in their life history. Based on this insight we have characterized the ice nucleation activity (INA) of the aerially disseminated spores (urediospores) of this group of fungi. Urediospores of this obligate plant parasite were collected from natural infections of 7 species of weeds in France, from coffee in Brazil and from ﬁeld and greenhouse-grown wheat in France, the USA, Turkey and Syria. Immersion freezing was used to determine freezing onset temperatures and the abundance of ice nuclei in suspensions of washed spores. Microbiological analyses of spores from France, the USA and Brazil, and subsequent tests of the ice nucleation activity of the bacteria associated with spores were deployed to quantify the contribution of bacteria to the ice nucleation activity of the spores. All samples of spores were ice nucleation active, having freezing onset temperatures as high as −4 ◦C. Spores in most of the samples carried cells of ice nucleation-active strains of the bacterium Pseudomonas syringae (at rates of less than 1 bacterial cell per 100 urediospores), but bacterial INA accounted for only a small fraction of the INA observed in spore suspensions. Changes in the INA of spore suspensions after treatment with lysozyme suggest that the INA of urediospores involves a polysaccharide. Based on data from the literature, we have estimated the concentrations of urediospores in air at cloud height and in rainfall. These quantities are very similar to those reported for other biological ice nucleators in these same substrates. However, at cloud level convective activity leads to widely varying concentrations of particles of surface origin, so that mean concentrations can underestimate their possible effects on clouds. We propose that spatial and temporal concentrations of biological ice nucleators active at temperatures > −10◦C and the speciﬁc conditions under which they can inﬂuence cloud glaciation need to be further evaluated so as to understand how evolutionary processes could have positively selected for INA.