Focus on Seed Programs The Seed Industry in Egypt 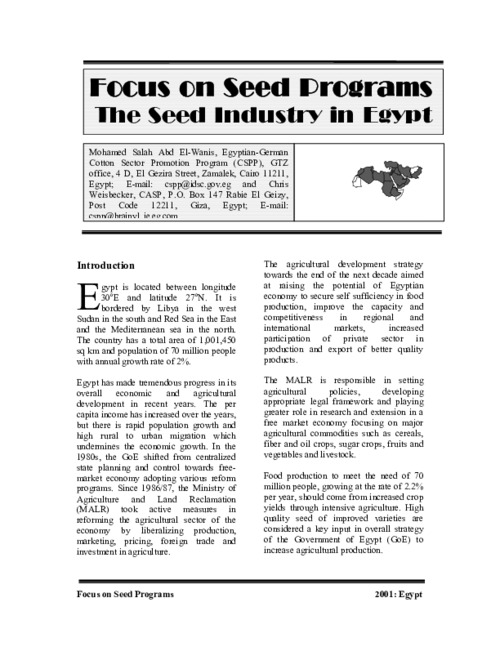 Egypt is located between longitude 30oE and latitude 27oN. It is bordered by Libya in the west Sudan in the south and Red Sea in the East and the Mediterranean sea in the north. The country has a total area of 1,001,450 sq km and population of 70 million people with annual growth rate of 2%. Egypt has made tremendous progress in its overall economic and agricultural development in recent years. The per capita income has increased over the years, but there is rapid population growth and high rural to urban migration which undermines the economic growth. In the 1980s, the GoE shifted from centralized state planning and control towards freemarket economy adopting various reform programs. Since 1986/87, the Ministry of Agriculture and Land Reclamation (MALR) took active measures in reforming the agricultural sector of the economy by liberalizing production, marketing, pricing, foreign trade and investment in agriculture.