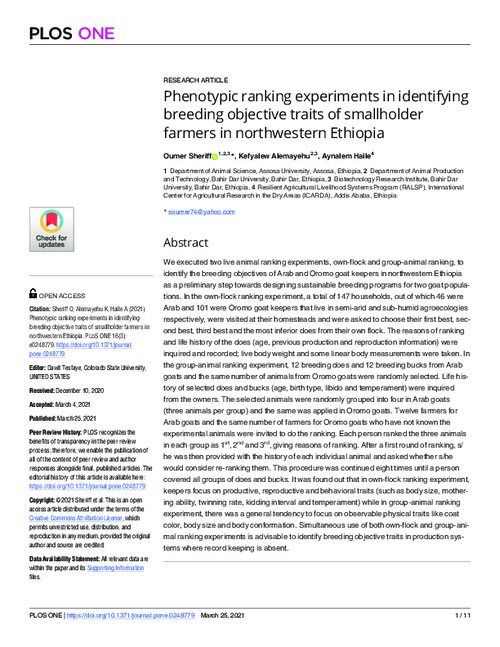 We executed two live animal ranking experiments, own-flock and group-animal ranking, to identify the breeding objectives of Arab and Oromo goat keepers in northwestern Ethiopia as a preliminary step towards designing sustainable breeding programs for two goat populations. In the own-flock ranking experiment, a total of 147 households, out of which 46 were Arab and 101 were Oromo goat keepers that live in semi-arid and sub-humid agroecologies respectively, were visited at their homesteads and were asked to choose their first best, second best, third best and the most inferior does from their own flock. The reasons of ranking and life history of the does (age, previous production and reproduction information) were inquired and recorded; live body weight and some linear body measurements were taken. In the group-animal ranking experiment, 12 breeding does and 12 breeding bucks from Arab goats and the same number of animals from Oromo goats were randomly selected. Life history of selected does and bucks (age, birth type, libido and temperament) were inquired from the owners. The selected animals were randomly grouped into four in Arab goats (three animals per group) and the same was applied in Oromo goats. Twelve farmers for Arab goats and the same number of farmers for Oromo goats who have not known the experimental animals were invited to do the ranking. Each person ranked the three animals in each group as 1(st), 2(nd) and 3(rd), giving reasons of ranking. After a first round of ranking, s/he was then provided with the history of each individual animal and asked whether s/he would consider re-ranking them. This procedure was continued eight times until a person covered all groups of does and bucks. It was found out that in own-flock ranking experiment, keepers focus on productive, reproductive and behavioral traits (such as body size, mothering ability, twinning rate, kidding interval and temperament) while in group-animal ranking experiment, there was a general tendency to focus on observable physical traits like coat color, body size and body conformation. Simultaneous use of both own-flock and group-animal ranking experiments is advisable to identify breeding objective traits in production systems where record keeping is absent.