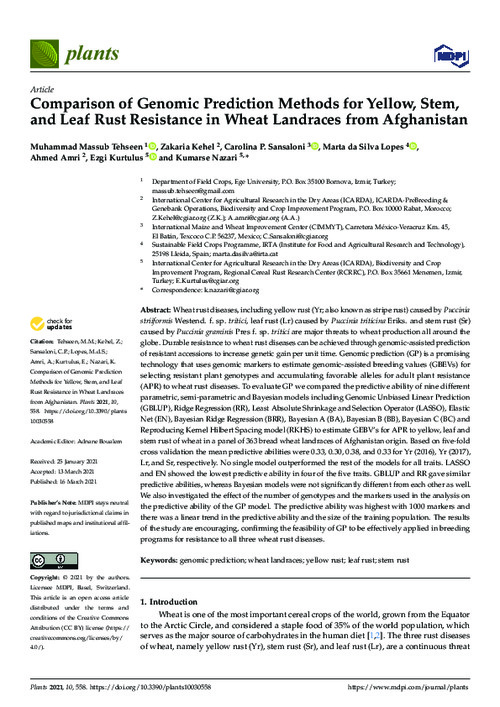 Wheat rust diseases, including yellow rust (Yr; also known as stripe rust) caused by Puccinia striiformis Westend. f. sp. tritici, leaf rust (Lr) caused by Puccinia triticina Eriks. and stem rust (Sr) caused by Puccinia graminis Pres f. sp. tritici are major threats to wheat production all around the globe. Durable resistance to wheat rust diseases can be achieved through genomic-assisted prediction of resistant accessions to increase genetic gain per unit time. Genomic prediction (GP) is a promising technology that uses genomic markers to estimate genomic-assisted breeding values (GBEVs) for selecting resistant plant genotypes and accumulating favorable alleles for adult plant resistance (APR) to wheat rust diseases. To evaluate GP we compared the predictive ability of nine different parametric, semi-parametric and Bayesian models including Genomic Unbiased Linear Prediction (GBLUP), Ridge Regression (RR), Least Absolute Shrinkage and Selection Operator (LASSO), Elastic Net (EN), Bayesian Ridge Regression (BRR), Bayesian A (BA), Bayesian B (BB), Bayesian C (BC) and Reproducing Kernel Hilbert Spacing model (RKHS) to estimate GEBV's for APR to yellow, leaf and stem rust of wheat in a panel of 363 bread wheat landraces of Afghanistan origin. Based on five-fold cross validation the mean predictive abilities were 0.33, 0.30, 0.38, and 0.33 for Yr (2016), Yr (2017), Lr, and Sr, respectively. No single model outperformed the rest of the models for all traits. LASSO and EN showed the lowest predictive ability in four of the five traits. GBLUP and RR gave similar predictive abilities, whereas Bayesian models were not significantly different from each other as well. We also investigated the effect of the number of genotypes and the markers used in the analysis on the predictive ability of the GP model. The predictive ability was highest with 1000 markers and there was a linear trend in the predictive ability and the size of the training population. The results of the study are encouraging, confirming the feasibility of GP to be effectively applied in breeding programs for resistance to all three wheat rust diseases.