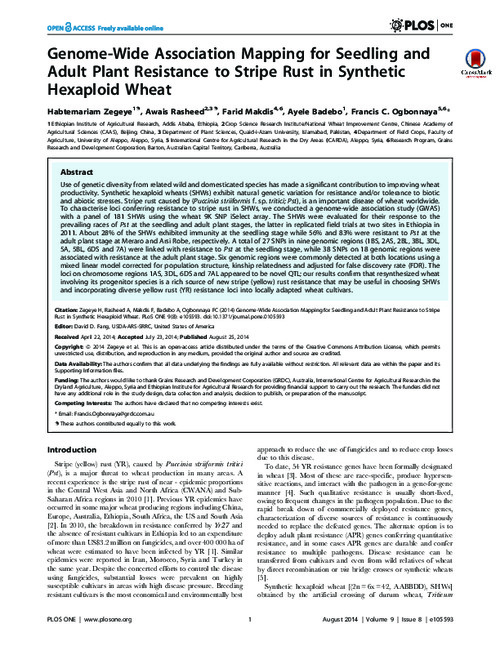 Use of genetic diversity from related wild and domesticated species has made a significant contribution to improving wheat productivity. Synthetic hexaploid wheats (SHWs) exhibit natural genetic variation for resistance and/or tolerance to biotic and abiotic stresses. Stripe rust caused by (Puccinia striiformis f. sp. tritici; Pst), is an important disease of wheat worldwide. To characterise loci conferring resistance to stripe rust in SHWs, we conducted a genome-wide association study (GWAS) with a panel of 181 SHWs using the wheat 9K SNP iSelect array. The SHWs were evaluated for their response to the prevailing races of Pst at the seedling and adult plant stages, the latter in replicated field trials at two sites in Ethiopia in 2011. About 28% of the SHWs exhibited immunity at the seedling stage while 56% and 83% were resistant to Pst at the adult plant stage at Meraro and Arsi Robe, respectively. A total of 27 SNPs in nine genomic regions (1BS, 2AS, 2BL, 3BL, 3DL, 5A, 5BL, 6DS and 7A) were linked with resistance to Pst at the seedling stage, while 38 SNPs on 18 genomic regions were associated with resistance at the adult plant stage. Six genomic regions were commonly detected at both locations using a mixed linear model corrected for population structure, kinship relatedness and adjusted for false discovery rate (FDR). The loci on chromosome regions 1AS, 3DL, 6DS and 7AL appeared to be novel QTL; our results confirm that resynthesized wheat involving its progenitor species is a rich source of new stripe (yellow) rust resistance that may be useful in choosing SHWs and incorporating diverse yellow rust (YR) resistance loci into locally adapted wheat cultivars.