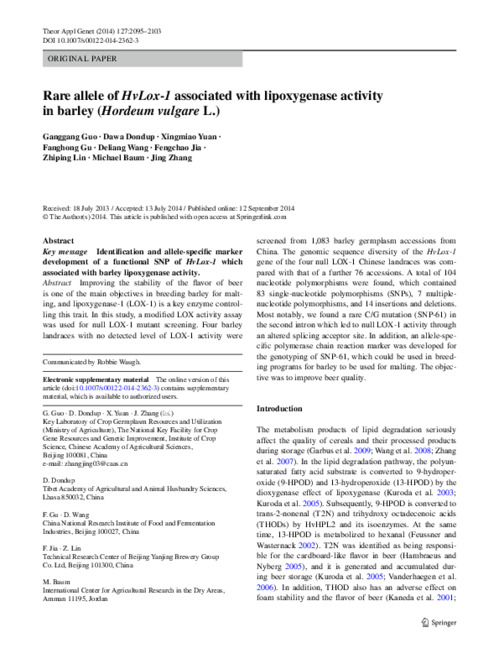 Key message: Identification and allele-specific marker development of a functional SNP of HvLox - 1 which associated with barley lipoxygenase activity. Abstract Improving the stability of the flavor of beer is one of the main objectives in breeding barley for malting, and lipoxygenase-1 (LOX-1) is a key enzyme controlling this trait. In this study, a modified LOX activity assay was used for null LOX-1 mutant screening. Four barley landraces with no detected level of LOX-1 activity were screened from 1,083 barley germplasm accessions from China. The genomic sequence diversity of the HvLox-1 gene of the four null LOX-1 Chinese landraces was compared with that of a further 76 accessions. A total of 104 nucleotide polymorphisms were found, which contained 83 single-nucleotide polymorphisms (SNPs), 7 multiple-nucleotide polymorphisms, and 14 insertions and deletions. Most notably, we found a rare C/G mutation (SNP-61) in the second intron which led to null LOX-1 activity through an altered splicing acceptor site. In addition, an allele-specific polymerase chain reaction marker was developed for the genotyping of SNP-61, which could be used in breeding programs for barley to be used for malting. The objective was to improve beer quality.