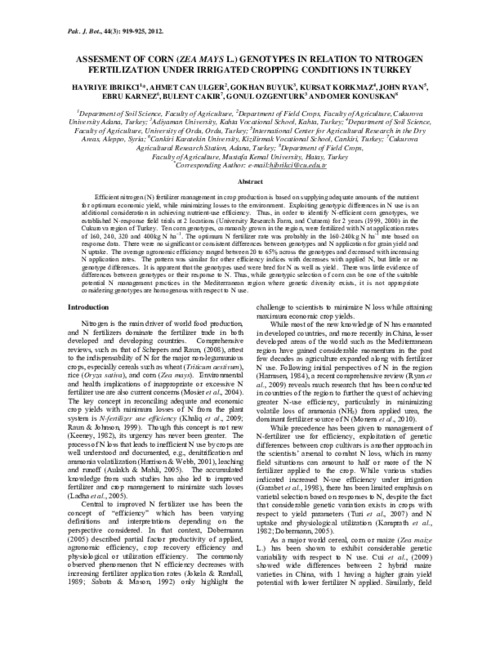 Efficient nitrogen (N) fertilizer management in crop production is based on supplying adequate amounts of the nutrient for optimum economic yield, while minimizing losses to the environment. Exploiting genotypic differences in N use is an additional consideration in achieving nutrient-use efficiency. Thus, in order to identify N-efficient corn genotypes, we established N-response field trials at 2 locations (University Research Farm, and Cutaem) for 2 years (1999, 2000) in the Cukurova region of Turkey. Ten corn genotypes, commonly grown in the region, were fertilized with N at application rates of 160, 240, 320 and 400kg N ha(-1). The optimum N fertilizer rate was probably in the 160-240kg N ha(-1) rate based on response data. There were no significant or consistent differences between genotypes and N application for grain yield and N uptake. The average agronomic efficiency ranged between 20 to 65% across the genotypes and decreased with increasing N application rates. The pattern was similar for other efficiency indices with decreases with applied N, but little or no genotype differences. It is apparent that the genotypes used were bred for N as well as yield. There was little evidence of differences between genotypes or their response to N. Thus, while genotypic selection of corn can be one of the suitable potential N management practices in the Mediterranean region where genetic diversity exists, it is not appropriate considering genotypes are homogenous with respect to N use.