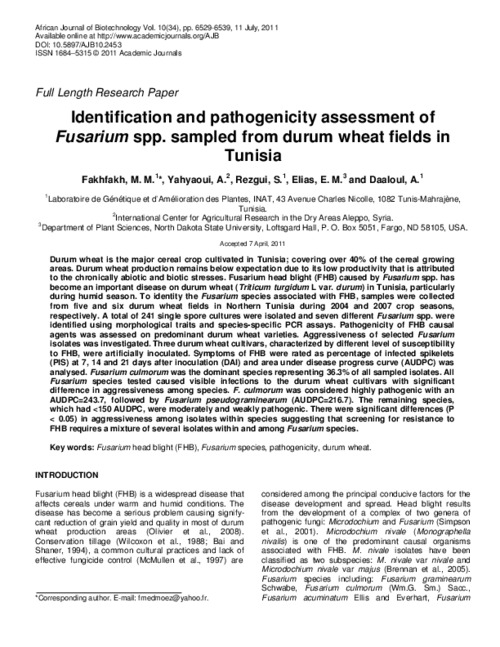 Durum wheat is the major cereal crop cultivated in Tunisia; covering over 40% of the cereal growing areas. Durum wheat production remains below expectation due to its low productivity that is attributed to the chronically abiotic and biotic stresses. Fusarium head blight (FHB) caused by Fusarium spp. has become an important disease on durum wheat (Triticum turgidum L var. durum) in Tunisia, particularly during humid season. To identity the Fusarium species associated with FHB, samples were collected from five and six durum wheat fields in Northern Tunisia during 2004 and 2007 crop seasons, respectively. A total of 241 single spore cultures were isolated and seven different Fusarium spp. were identified using morphological traits and species-specific PCR assays. Pathogenicity of FHB causal agents was assessed on predominant durum wheat varieties. Aggressiveness of selected Fusarium isolates was investigated. Three durum wheat cultivars, characterized by different level of susceptibility to FHB, were artificially inoculated. Symptoms of FHB were rated as percentage of infected spikelets (PIS) at 7, 14 and 21 days after inoculation (DAI) and area under disease progress curve (AUDPC) was analysed. Fusarium culmorum was the dominant species representing 36.3% of all sampled isolates. All Fusarium species tested caused visible infections to the durum wheat cultivars with significant difference in aggressiveness among species. F. culmorum was considered highly pathogenic with an AUDPC = 243.7, followed by Fusarium pseudograminearum (AUDPC = 216.7). The remaining species, which had < 150 AUDPC, were moderately and weakly pathogenic. There were significant differences (P < 0.05) in aggressiveness among isolates within species suggesting that screening for resistance to FHB requires a mixture of several isolates within and among Fusarium species.