Comparative transcriptome analysis of AP2/EREBP gene family under normal and hormone treatments, and under two drought stresses in NILs setup by Aday Selection and IR64 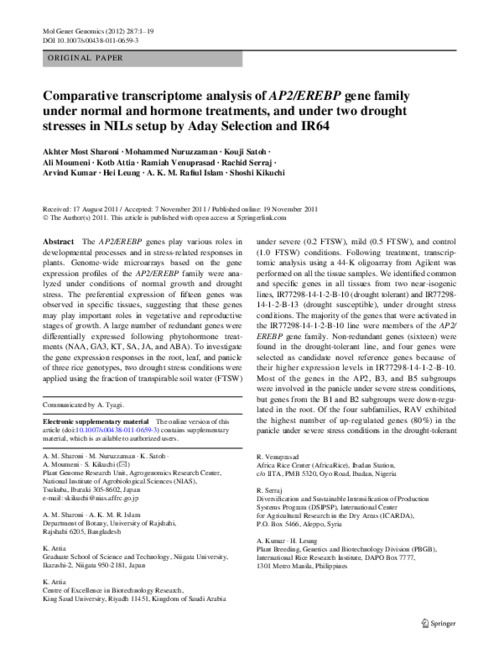 The AP2/EREBP genes play various roles in developmental processes and in stress-related responses in plants. Genome-wide microarrays based on the gene expression profiles of the AP2/EREBP family were analyzed under conditions of normal growth and drought stress. The preferential expression of fifteen genes was observed in specific tissues, suggesting that these genes may play important roles in vegetative and reproductive stages of growth. A large number of redundant genes were differentially expressed following phytohormone treatments (NAA, GA3, KT, SA, JA, and ABA). To investigate the gene expression responses in the root, leaf, and panicle of three rice genotypes, two drought stress conditions were applied using the fraction of transpirable soil water (FTSW) under severe (0.2 FTSW), mild (0.5 FTSW), and control (1.0 FTSW) conditions. Following treatment, transcriptomic analysis using a 44-K oligoarray from Agilent was performed on all the tissue samples. We identified common and specific genes in all tissues from two near-isogenic lines, IR77298-14-1-2-B-10 (drought tolerant) and IR77298-14-1-2-B-13 (drought susceptible), under drought stress conditions. The majority of the genes that were activated in the IR77298-14-1-2-B-10 line were members of the AP2/EREBP gene family. Non-redundant genes (sixteen) were found in the drought-tolerant line, and four genes were selected as candidate novel reference genes because of their higher expression levels in IR77298-14-1-2-B-10. Most of the genes in the AP2, B3, and B5 subgroups were involved in the panicle under severe stress conditions, but genes from the B1 and B2 subgroups were down-regulated in the root. Of the four subfamilies, RAV exhibited the highest number of up-regulated genes (80%) in the panicle under severe stress conditions in the drought-tolerant line compared to Minghui 63 under normal conditions, and the gene structures of the RAV subfamily may be involved in the response to drought stress in the flowering stage. These results provide a useful reference for the cloning of candidate genes from the specific subgroup for further functional analysis.