Hanfets, a barley and wheat mixture in Eritrea: Yield, stability and farmer preferences 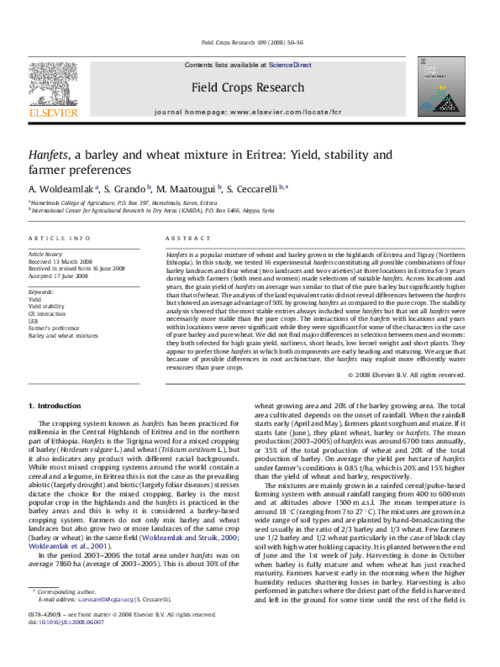 Hanfets is a popular mixture of wheat and barley grown in the highlands of Eritrea and Tigray (Northern Ethiopia). in this study, we tested 16 experimental hanfets constituting all possible combinations of four barley landraces and four wheat (two landraces and two varieties) at three locations in Eritrea for 3 years during which farmers (both men and women) made selections of suitable hanfets. Across locations and years, the grain yield of hanfets on average was similar to that of the pure barley but significantly higher than that of wheat. The analysis of the land equivalent ratio did not reveal differences between the hanfets but showed an average advantage of 50% by growing hanfets as compared to the pure crops. The stability analysis showed that the most stable entries always included some hanfets but that not all hanfets were necessarily more stable than the pure crops. The interactions of the hanfets with locations and years within locations were never significant while they were significant for some of the characters in the case Of pure barley and pure wheat. We did not find major differences in selection between men and women: they both selected for high grain yield, earliness, short heads, low kernel weight and short plants. They appear to prefer those hanfets in which both components are early heading and maturing. We argue that because of possible differences in root architecture, the hanfets may exploit more efficiently water resources than pure crops. (C) 2008 Elsevier B.V. All rights reserved.