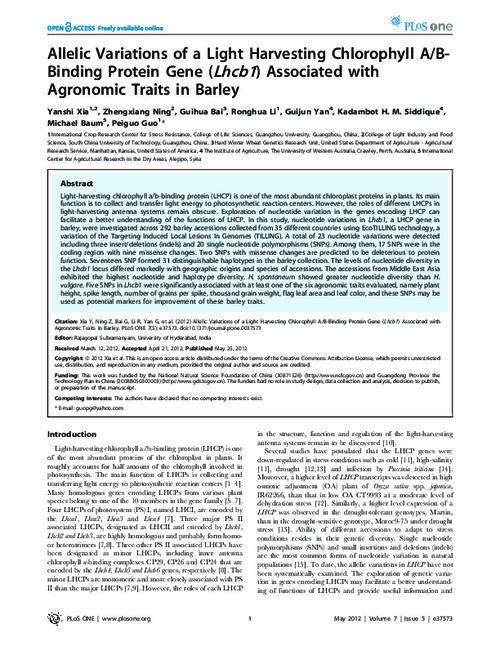 Light-harvesting chlorophyll a/b-binding protein (LHCP) is one of the most abundant chloroplast proteins in plants. Its main function is to collect and transfer light energy to photosynthetic reaction centers. However, the roles of different LHCPs in light-harvesting antenna systems remain obscure. Exploration of nucleotide variation in the genes encoding LHCP can facilitate a better understanding of the functions of LHCP. In this study, nucleotide variations in Lhcb1, a LHCP gene in barley, were investigated across 292 barley accessions collected from 35 different countries using EcoTILLING technology, a variation of the Targeting Induced Local Lesions In Genomes (TILLING). A total of 23 nucleotide variations were detected including three insert/deletions (indels) and 20 single nucleotide polymorphisms (SNPs). Among them, 17 SNPs were in the coding region with nine missense changes. Two SNPs with missense changes are predicted to be deleterious to protein function. Seventeen SNP formed 31 distinguishable haplotypes in the barley collection. The levels of nucleotide diversity in the Lhcb1 locus differed markedly with geographic origins and species of accessions. The accessions from Middle East Asia exhibited the highest nucleotide and haplotype diversity. H. spontaneum showed greater nucleotide diversity than H. vulgare. Five SNPs in Lhcb1 were significantly associated with at least one of the six agronomic traits evaluated, namely plant height, spike length, number of grains per spike, thousand grain weight, flag leaf area and leaf color, and these SNPs may be used as potential markers for improvement of these barley traits.