Ecogeographic survey and gap analysis for Medicago L.: recommendations for in situ and ex situ conservation of Lebanese species 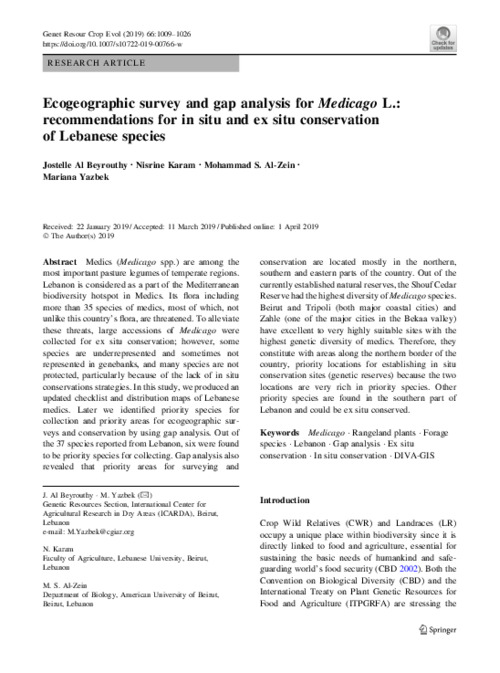 Medics (Medicago spp.) are among the most important pasture legumes of temperate regions. Lebanon is considered as a part of the Mediterranean biodiversity hotspot in Medics. Its flora including more than 35 species of medics, most of which, not unlike this country’s flora, are threatened. To alleviate these threats, large accessions of Medicago were collected for ex situ conservation; however, some species are underrepresented and sometimes not represented in genebanks, and many species are not protected, particularly because of the lack of in situ conservations strategies. In this study, we produced an updated checklist and distribution maps of Lebanese medics. Later we identified priority species for collection and priority areas for ecogeographic surveys and conservation by using gap analysis. Out of the 37 species reported from Lebanon, six were found to be priority species for collecting. Gap analysis also revealed that priority areas for surveying and conservation are located mostly in the northern, southern and eastern parts of the country. Out of the currently established natural reserves, the Shouf Cedar Reserve had the highest diversity of Medicago species. Beirut and Tripoli (both major coastal cities) and Zahle (one of the major cities in the Bekaa valley) have excellent to very highly suitable sites with the highest genetic diversity of medics. Therefore, they constitute with areas along the northern border of the country, priority locations for establishing in situ conservation sites (genetic reserves) because the two locations are very rich in priority species. Other priority species are found in the southern part of Lebanon and could be ex situ conserved.