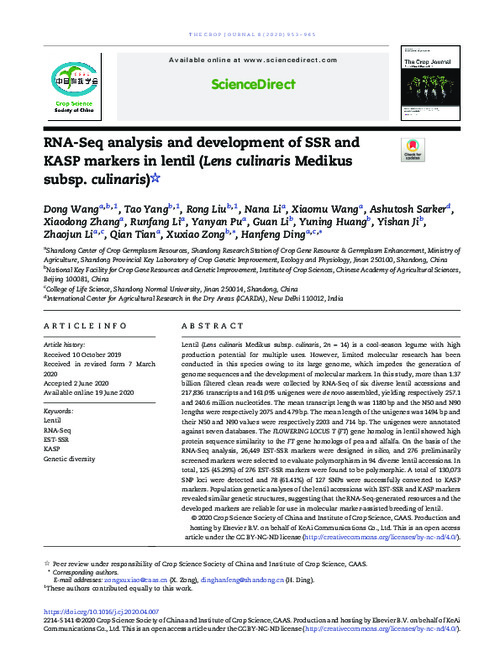 Lentil (Lens culinaris Medikus subsp. culinaris, 2n = 14) is a cool-season legume with high production potential for multiple uses. However, limited molecular research has been conducted in this species owing to its large genome, which impedes the generation of genome sequences and the development of molecular markers. In this study, more than 1.37 billion filtered clean reads were collected by RNA-Seq of six diverse lentil accessions and 217,836 transcripts and 161,095 unigenes were de novo assembled, yielding respectively 257.1 and 240.6 million nucleotides. The mean transcript length was 1180 bp and the N50 and N90 lengths were respectively 2075 and 479 bp. The mean length of the unigenes was 1494 bp and their N50 and N90 values were respectively 2203 and 714 bp. The unigenes were annotated against seven databases. The FLOWERING LOCUS T (FT) gene homolog in lentil showed high protein sequence similarity to the FT gene homologs of pea and alfalfa. On the basis of the RNA-Seq analysis, 26,449 EST-SSR markers were designed in silico, and 276 preliminarily screened markers were selected to evaluate polymorphism in 94 diverse lentil accessions. In total, 125 (45.29%) of 276 EST-SSR markers were found to be polymorphic. A total of 130,073 SNP loci were detected and 78 (61.41%) of 127 SNPs were successfully converted to KASP markers. Population genetic analyses of the lentil accessions with EST-SSR and KASP markers revealed similar genetic structures, suggesting that the RNA-Seq-generated resources and the developed markers are reliable for use in molecular marker-assisted breeding of lentil.