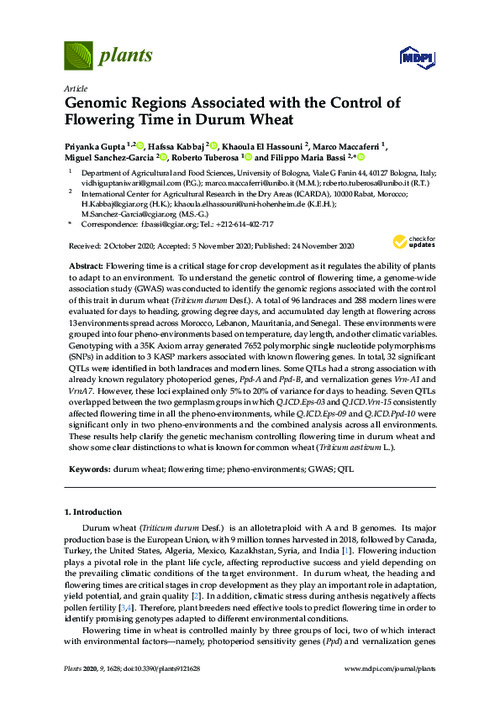 Flowering time is a critical stage for crop development as it regulates the ability of plants to adapt to an environment. To understand the genetic control of flowering time, a genome-wide association study (GWAS) was conducted to identify the genomic regions associated with the control of this trait in durum wheat (Triticum durum Desf.). A total of 96 landraces and 288 modern lines were evaluated for days to heading, growing degree days, and accumulated day length at flowering across 13 environments spread across Morocco, Lebanon, Mauritania, and Senegal. These environments were grouped into four pheno-environments based on temperature, day length, and other climatic variables. Genotyping with a 35K Axiom array generated 7652 polymorphic single nucleotide polymorphisms (SNPs) in addition to 3 KASP markers associated with known flowering genes. In total, 32 significant QTLs were identified in both landraces and modern lines. Some QTLs had a strong association with already known regulatory photoperiod genes, Ppd-A and Ppd-B, and vernalization genes Vrn-A1 and VrnA7. However, these loci explained only 5% to 20% of variance for days to heading. Seven QTLs overlapped between the two germplasm groups in which Q.ICD.Eps-03 and Q.ICD.Vrn-15 consistently affected flowering time in all the pheno-environments, while Q.ICD.Eps-09 and Q.ICD.Ppd-10 were significant only in two pheno-environments and the combined analysis across all environments. These results help clarify the genetic mechanism controlling flowering time in durum wheat and show some clear distinctions to what is known for common wheat (Triticum aestivum L.)