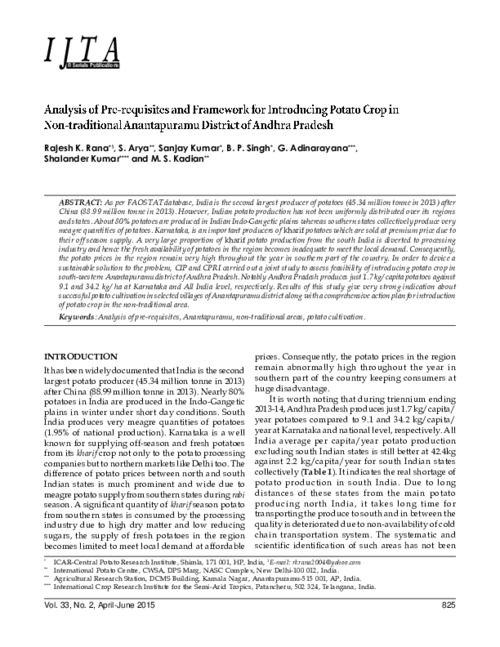 As per FAOSTAT database, India is the second largest producer of potatoes (45.34 million tonne in 2013) after China (88.99 million tonne in 2013). However, Indian potato production has not been uniformly distributed over its regions and states. About 80% potatoes are produced in Indian Indo-Gangetic plains whereas southern states collectively produce very meagre quantities of potatoes. Karnataka, is an important producers of kharif potatoes which are sold at premium price due to their off season supply. A very large proportion of kharif potato production from the south India is diverted to processing industry and hence the fresh availability of potatoes in the region becomes inadequate to meet the local demand. Consequently, the potato prices in the region remain very high throughout the year in southern part of the country. In order to device a sustainable solution to the problem, CIP and CPRI carried out a joint study to assess feasibility of introducing potato crop in south-western Anantapuramu district of Andhra Pradesh. Notably Andhra Pradesh produces just 1.7 kg/ capita potatoes against 9.1 and 34.2 kg/ ha at Karnataka and All India level, respectively. Results of this study give very strong indication about successful potato cultivation in selected villages of Anantapuramu district along with a comprehensive action plan for introduction of potato crop in the non-traditional area.