Baseline Survey for Agricultural Biodiversity in Vijayapur District of Karnataka 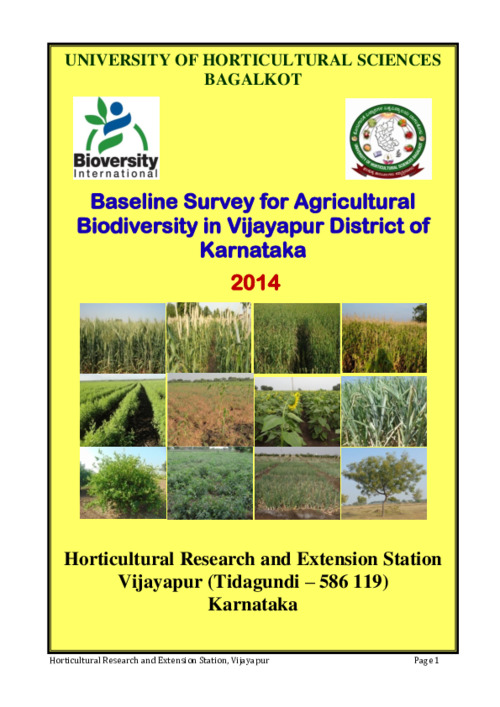 Bioversity International is a global research-for-development organization belonging to CGIAR consortium with a vision that agricultural biodiversity nourishes people and sustains the planet. It delivers scientific evidence, management practices and policy options to use and safeguard agricultural biodiversity to attain sustainable global food and nutrition security. Bioversity works with partners all over the world including India. In its effort to empower farmers through various interventions for conserving and utilizing the native/local biodiversity for sustaining the efforts in conservation and management and ensuring nutritional security on long-term basis it has started a collaborative programmes with University of Horticultural Horticultural Research and Extension Station, Vijayapur Page 11 Sciences, Bagalkot, Karnataka, India which has a similar vision mandate. A survey was planned and implemented in three villages namely Balaganur and Mannur in Sindhagi taluka and Nandyal village of Basavana Bagewadi taluka in Bijapur district of Karnataka. A total 200 households were identified among the above three villages for the this survey work. Focused Group Discussions (FGD) were carried out to elicit the indegenous and traditional local knowledge about agriculture biodeversity, dietary biodiversity and market biodiversity available in the study areas. This was mainly aimed at generating a complete inventary of usefull plant, animal, acquatic species used by local communities, particularly for food and income. It also aimed at preparing the inventary of variety of food consumed and the species and products bought and sold in the market by the people in the study villages.