Use and conservation of agrobiodiversity for increased agricultural sustainability, smallholder wellbeing and resilience to climate change in India - Andhra Pradesh 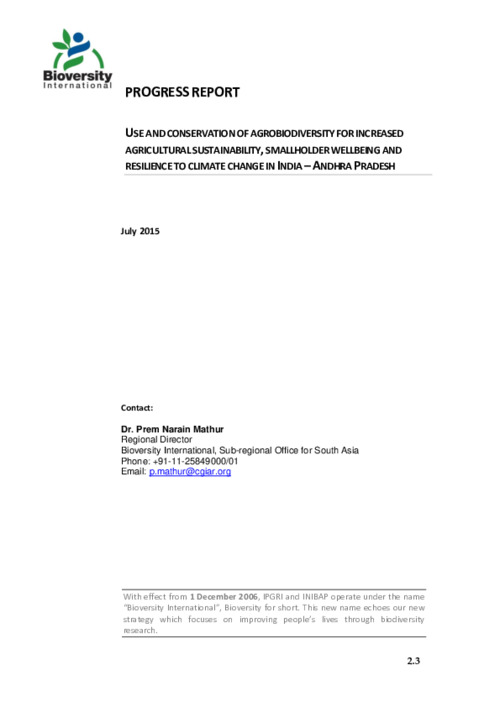 Prem N. Mathur. (10/6/2015). Use and conservation of agrobiodiversity for increased agricultural sustainability, smallholder wellbeing and resilience to climate change in India - Andhra Pradesh.

Because of large scale industrialization, fast urbanization, mega hydraulic projects and surface road/rail network, many of the natural ecosystems /habitats have been destroyed resulting in increased number of endangered species and some of the rare species are already lost. Further large scale cultivation of improved varieties of only few crops namely, rice, wheat, maize, potato, tomato etc., large number of land races, traditional varieties and their wild relatives of several useful and nutritious crops are getting replaced. This has resulted in narrowing the range of biodiversity as the result shrinking food basket. Due to cultivation of monotypic and small range of food deriving spices, the nutritional and health insecurity is becoming glaring. Majority of the women and children in the developing countries with high population density are reported to be mall nourished /under nourished. The food what majorities of people eat is devoid of vitamins, minerals and enzymes and as result, people are facing deficiency disorders besides losing immunity. Realizing the grave danger to the biodiversity and in turn nutrition and health security, several initiatives are being taken across the globe both by national and international organizations. Bioversity International is research for development organization seeking solutions to global issues through conservation of agriculture and tree biodiversity. As a part of this agenda, Bioversity International had initiated a phyto-geographical baseline survey aiming at documentation of crop diversity both cultivated and wild, diet diversity and market diversity to understand the intrinsic relationship between crop diversity in cultivated and on open lands to the dietary and market diversity. The knowledge generated by the ABD-BS has been taken as the basis for designing and implementing interventions that contribute to improve their well-being of rural households in action sites.