Desert farmers on the path to economic self-reliance 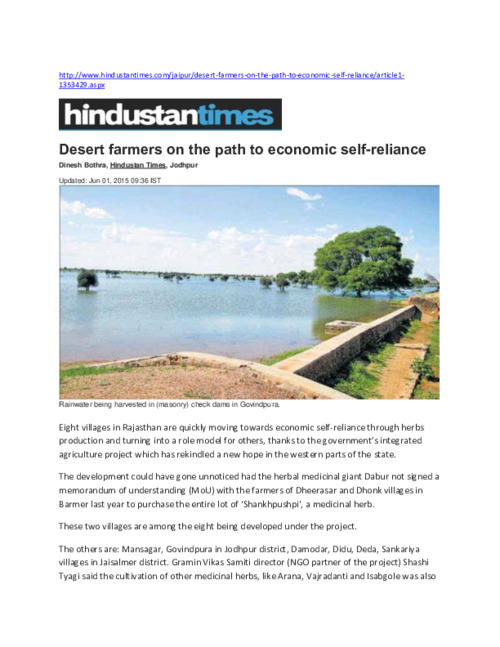 Eight villages in Rajasthan are quickly moving towards economic self-reliance through herbs production and turning into a role model for others, thanks to the government’s integrated agriculture project which has rekindled a new hope in the western parts of the state. The development could have gone unnoticed had the herbal medicinal giant Dabur not signed a memorandum of understanding (MoU) with the farmers of Dheerasar and Dhonk villages in Barmer last year to purchase the entire lot of ‘Shankhpushpi', a medicinal herb. These two villages are among the eight being developed under the project. The others are: Mansagar, Govindpura in Jodhpur district, Damodar, Didu, Deda, Sankariya villages in Jaisalmer district. Gramin Vikas Samiti director (NGO partner of the project) Shashi Tyagi said the cultivation of other medicinal herbs, like Arana, Vajradanti and Isabgole was also being encouraged under the project which were sure to attract other pharmaceutical giants like Dabur. In fact, Dabur had purchased 10 quintals of Shankhpushpi at ` 1,600 to ` 2,000 per kg from the two villages. This may encourage even more farmers to grow herbs, sources said. The project under which these schemes operate has a long name “Dryland Systems: Integrated Agricultural Production Systems for the Poor and Vulnerable in Dry Areas.” But, it effectively addresses the weaknesses attached to an arid land and turns it into a high yielding zone through water harvesting, cultivation of improved quality crops through scientific methods, high breed cattle and herbal plants and help farmers market their produce, senior programme coordinator Rajendra Kumar said.