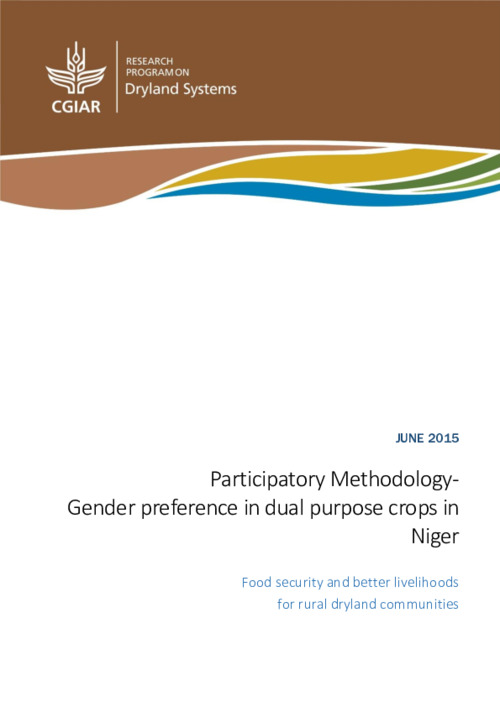 Nigerien women face systematic discrimination in terms of access to land, livestock and other assets. Female represents 36% of the economically active population in Agriculture (FAOSTAT, 2013) despite the fact that most household are male headed. Also, the gender gap tends to be widest among Niger’s most productive farmers. The primary factors that contribute to the gender productivity gap in Niger are: (i) farm labor, with women facing significant challenges in accessing, using, and supervising male farm labor; (ii) the quantity and quality of fertilizer use, with men using more inorganic fertilizer per hectare than women; and (iii) land ownership and characteristics, with men owning more land and enjoying higher returns to ownership than women (Yetna et al 2015). Based principally on subsistence rain-fed farming and livestock keeping, the country’s agriculture is still largely at the mercy of the varied climate. The main food crops are: pearl millet, sorghum, peanuts, cowpeas and rice. Other important product is livestock which occupies about 87% of the rural population not only as a way of life but also as an economic social and cultural activity. The last census of livestock highlights the growing proportion of livestock which is in sedentary zone (approximately 66% of total) against the nomadic livestock (Ministère de l’Elevage, 2012). Against such a backdrop, it is important to understand the gender preference on the locally available crops (food for human and feed for animal) for food security and income. What are the crop germplasm available in these villages, and which varieties are preferred for why, what and by whom? Thus the general objective of this work is to establish a participatory diagnosis of dual purpose crops dynamics in two local agrosystems of Gazaoua (Niger).