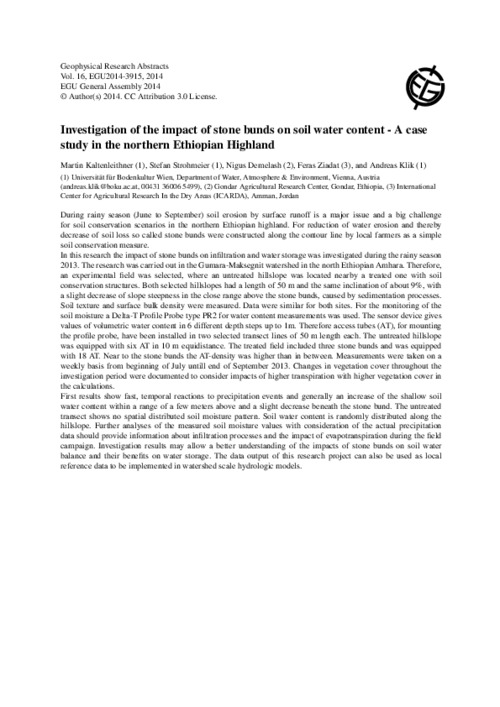 During rainy season (June to September) soil erosion by surface runoff is a major issue and a big challenge for soil conservation scenarios in the northern Ethiopian highland. For reduction of water erosion and thereby decrease of soil loss so called stone bunds were constructed along the contour line by local farmers as a simple soil conservation measure. In this research the impact of stone bunds on infiltration and water storage was investigated during the rainy season 2013. The research was carried out in the Gumara-Maksegnit watershed in the north Ethiopian Amhara. Therefore, an experimental field was selected, where an untreated hillslope was located nearby a treated one with soil conservation structures. Both selected hillslopes had a length of 50 m and the same inclination of about 9%, with a slight decrease of slope steepness in the close range above the stone bunds, caused by sedimentation processes. Soil texture and surface bulk density were measured. Data were similar for both sites. For the monitoring of the soil moisture a Delta-T Profile Probe type PR2 for water content measurements was used. The sensor device gives values of volumetric water content in 6 different depth steps up to 1m. Therefore access tubes (AT), for mounting the profile probe, have been installed in two selected transect lines of 50 m length each. The untreated hillslope was equipped with six AT in 10 m equidistance. The treated field included three stone bunds and was equipped with 18 AT. Near to the stone bunds the AT-density was higher than in between. Measurements were taken on a weekly basis from beginning of July untill end of September 2013. Changes in vegetation cover throughout the investigation period were documented to consider impacts of higher transpiration with higher vegetation cover in the calculations.