The Baseline Analysis of the Nile Delta of Egypt 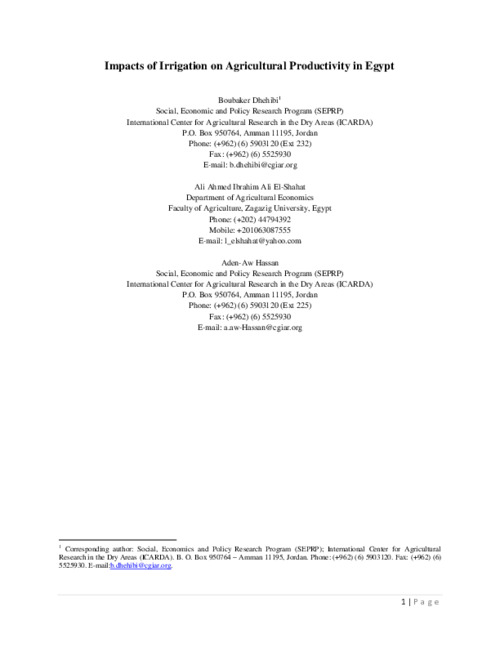 This study establishes baseline information on the socioeconomic and biophysical aspect of the three delta sites in Egypt as part of livelihood characterization and provides reference for monitoring impact in the future. The three sites represent the main delta regions (old lands), salt affected lands and recently reclaimed desert lands (called in her as new lands). The report is based on a baseline survey of 452 households in equal proportions in the three land types and covering 8 villages in Zagazig district (old lands), 5 villages in El-Hosinia district both of these in Sharkia governorate and 9 villages in Bustan district in Nobaria governorate (new lands). The study reveals quite high level of illiteracy among household heads (18-33%). Newlands with higher proportion of graduates settled by the governorate as employment option has the lowest illiteracy (18%). Illiteracy was highest among women farmers. This specific factor is critical for communicating farmers with written material of new technologies and modern farm management. The farm holdings of the surveyed households are quite small, ranging from 1-2 feddans (less that a hectare) in the more resourceful old lands, 5 feddans (2.1 ha) in salt affected lands, and 2.5 to 10 feddans (1.0-4.2 ha) in the new lands. The income of households farming the Old lands is more balanced and diversified as shown by the frequency of farmers reporting income from crops (91%) and livestock (86%), and from off farm work in the agriculture (52%) and non-agricultural (32%) sectors. But mainly relying on farm income, with crop and livestock providing 76% of the income, and that is equally divided by crops and livestock (38% each). Crop income is dominated by wheat (15%) and rice (17%) and off-farm work in the non-agricultural sectors (19%). Unexpectedly, agricultural farm labor, on the average, contributed very little and the reason could be the fact that the surveyed households were farming households with own lands who are less likely to work as farm labor compared to the landless households who will fill that role. In the salt affected area, crops provided the main source of livelihoods contributing 70% of the income, with rice at dominant place 29%, followed by cotton and sugar beet each with 15% and wheat 9%. Livestock contributes to 24% of the income, and agricultural farm labor providing 5%. In the New lands a different income pattern emerges. Contribution of farm income (from crop, trees, and livestock) to total annual household income on average reaches 54%. The contribution from filed crops represents about 18%, fruit trees 35% and from livestock production was only 1% of the gross household income. A contribution off-farm activity in agricultural working was represented 30%, while contribution of off-farm activities in non-agriculture sector was around 16% of the gross household income. Orange production (characterized as mainly local orange type) is relatively more important for the household income compared to filed crops; average income from orange was the highest (67% of income from all crops and fruit trees combined) followed by wheat (10%). The data revealed major farm constraints as the lack of or week provision of services including credit (mostly relying on traders for financing their operations), availability of inputs, and market fluctuations as well as distances of markets. This suggests a need for strong review of agricultural finance and calls for the development of financing arrangements that are more suitable to stallholder farming needs (one third of who are illiterate as revealed in this survey). The study reveals that farm income is stretched thinly to cover household needs and overall income is very close to the income poverty line (overall sample average around USD2 per day per capita). Crop area is dominated by the major cereals (rice and wheat) which are supported by government policy. The study raised two fundamental questions for Egypt’s agriculture. The first question is: What are the most efficient crops that can provide the highest value for the limited land and water resources in terms of farm income and rural employment, considering the different land types such as salinity, newly reclaimed desert lands, etc. This should consider the balance between cereals and fruits and vegetables and also consider the fluctuations of market prices. Related point to this question is: What are the tradeoffs between supporting cereal production through policy and promoting high value products (livestock, fruits and vegetables) with high standard for trade. The other fundamental question is how climate change would affect Egypt’s agriculture in the future and what adaptation measure can be taken now to avoid irreversible consequences. Climate change may also affect the crop mix in the future and that has to be analyzed. The baseline data provided opportunity to address this fundamental question through whole farm and sector modeling by region as specified by the land type.