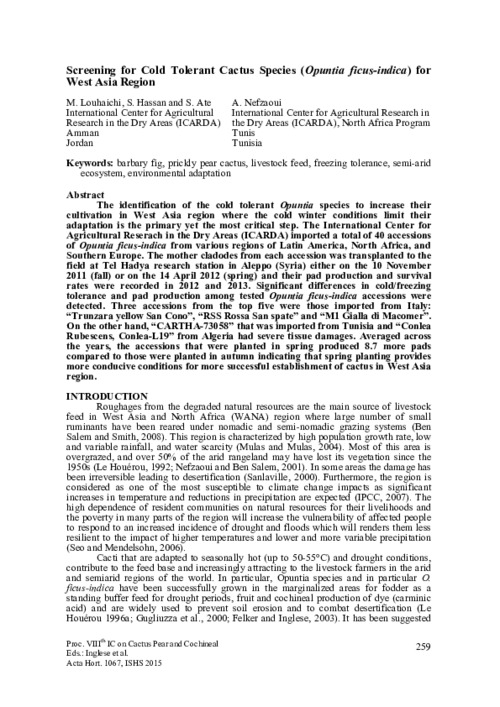 The identification of the cold tolerant Opuntia species to increase their cultivation in West Asia region where the cold winter conditions limit their adaptation is the primary yet the most critical step. The International Center for Agricultural Reserach in the Dry Areas (ICARDA) imported a total of 40 accessions of Opuntia ficus-indica from various regions of Latin America, North Africa, and Southern Europe. The mother cladodes from each accession was transplanted to the field at Tel Hadya research station in Aleppo (Syria) either on the 10 November 2011 (fall) or on the 14 April 2012 (spring) and their pad production and survival rates were recorded in 2012 and 2013. Significant differences in cold/freezing tolerance and pad production among tested Opuntia ficus-indica accessions were detected. Three accessions from the top five were those imported from Italy: “Trunzara yellow San Cono”, “RSS Rossa San spate” and “M1 Gialla di Macomer”. On the other hand, “CARTHA-73058” that was imported from Tunisia and “Conlea Rubescens, Conlea-L19” from Algeria had severe tissue damages. Averaged across the years, the accessions that were planted in spring produced 8.7 more pads compared to those were planted in autumn indicating that spring planting provides more conducive conditions for more successful establishment of cactus in West Asia region.