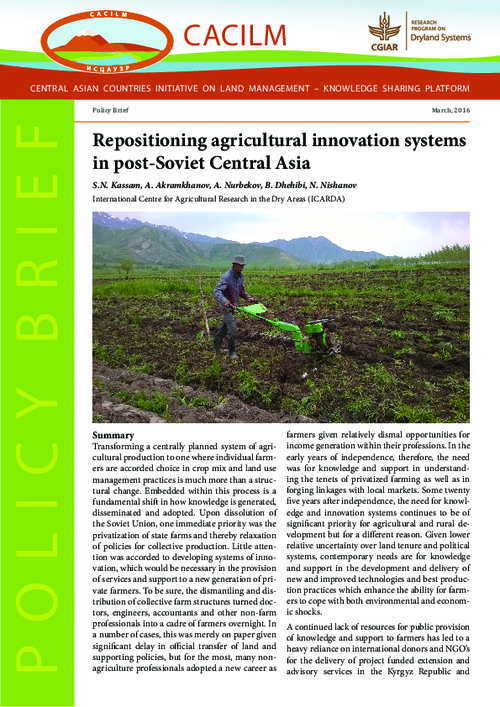 Transforming a centrally planned system of agricultural production to one where individual farmers are accorded choice in crop mix and land use management practices is much more than structural change. Embedded within this process is a fundamental shift in how knowledge is generated, disseminated and adopted. Upon dissolution of the Soviet Union, an immediate priority was on the privatization of state farms and thereby relaxation of policies for collective production. Little attention was accorded to developing systems of innovation which would be necessary in provision of services and support to a new generation of private farmers. To be sure, the dismantling and distribution of collective farm structures turned doctors, engineers, accountants and other non-farm professionals into a cadre of farmers overnight. In a number of cases, this was merely on paper given significant delay in official transfer of land and supporting policies, but for the most, many non-agriculture professionals adopted a new career as farmers given relatively dismal opportunities for income generation within their prior professions. In the early years of independence, therefore, the need was for knowledge and support in understanding the tenets of privatized farming as well as in forging linkages with local markets. Some twenty five years after independence, the need for knowledge and innovation systems continues to be of significant priority for agricultural and rural development but for a different reason. Given lower relative uncertainty over land tenure and political systems, contemporary needs are for knowledge and support in the development and delivery of new and improved technologies and best production practices which enhance the ability for farmers to cope with both environmental and economic shocks.