Applications of geo-informatics in cactus pear research and development 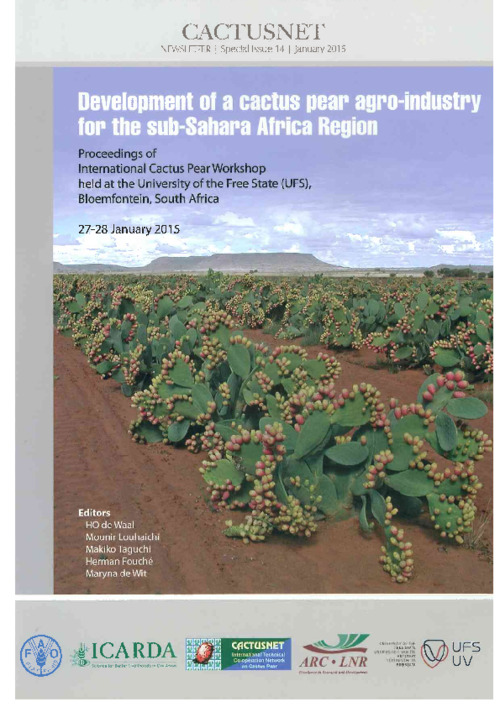 Cactus pear (Opuntia ficus-indica (L.) Mill.) has been planted for forage reserves and human consumption in arid and semi-arid regions for centuries for its ability to grow in harsh conditions characterized by high temperatures, lack of water and poor soil. Cactus pear has a high water use efficiency because it has a waxy cuticle that reduces evaporation from photosynthetic surfaces, lacks true leaves and succulent stems (pads) that can store water. It also employs Crassulacean Acid Metabolism (CAM) to reduce water loss. Estimates of water use efficiency vary from 1 kg dry matter (DM) per 300 kg of water (Le Houérou and El Barghati, 1982). Cactus has been used extensively as a fodder crop for livestock because of its capacity to produce biomass, (Nefzaoui et al., 2013). Cactus is limited in its distribution by freezing temperatures but tolerates high temperatures well. Areas in the semi-arid climatic zone with a mean annual rainfall between 400-600 mm are optimal for cactus, although it may grow in areas with as little as 200 mm year, if soils are deep an permeable (Nobel, 2009). Our objective was to design a computer program in the R language that would use existing climatic and topographic databases to predict and map cactus suitability for the eastern Mediterranean region. We choosed a weighted sum model (WSM) in a multi-criteria decision analysis (MCDA) approach to predict areas most likely for successful cactus plantations.