Approaches to Total Factor Productivity Measurements in the Agriculture Economy 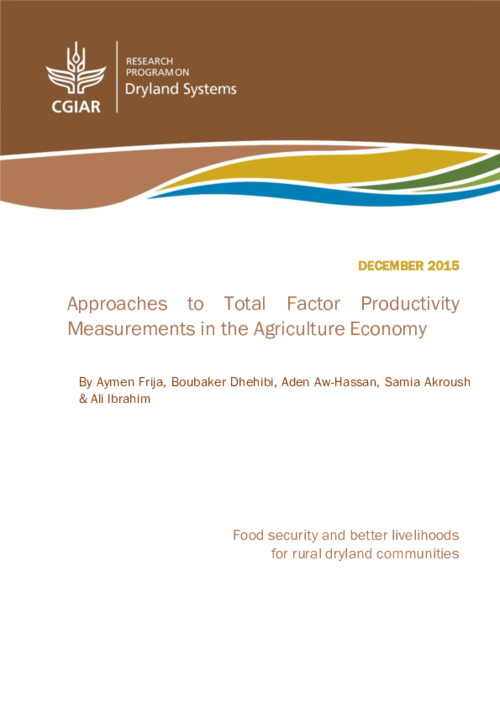 Productivity is defined as the efficiency of a production system, and as such would be a ratio of units of output per unit of input to the system (James and Carles, 1996). It is also defined as the production value (or quantity) divided by the amount of factors consumed in the production process (Pepitone, 2000). Generally, productivity is the relationship between the quantity of output and the quantity of input used to generate that output. It is a ratio of output to input (Productivity = Output/Input). The output used for productivity calculation could be of different forms. It can be in a form of produced goods or provided services. Outputs may be expressed in physical (quantities) or financial (value) terms. Inputs are resources used to produce outputs. Most common forms of inputs are labor, capital, and intermediate inputs. Productivity has an effect on organizations/economies/sectors growth. In fact, higher productivity results in performances enhancement (production increases) and higher profits (minimal factors costs, better selling prices, marketing capacities, etc.). Enhanced skills in transforming inputs to outputs play critical role in enhancing productivity and competitiveness. In fact, with the same amount of inputs, some farmers can produce more than others, depending on their skills, knowledge level, and cognitive capacities. The two most commonly used measures of productivity are single (partial) factor productivity (SFP) and total (multifactor) factor productivity (TFP). When multiple inputs of heterogeneous nature are used in the production process, aggregation of these inputs may require the use of price indices. This implies that productivity can be affected by both changes in relative prices of inputs and by the input use per unit of output (Kathuria et al., 2011). Precise definitions of partial and total factor productivity will be presented in this working paper. However, main focus will be on the total factor productivity, since it is the method we are using in the APWEC-MENA project in order to account for agricultural sector growth in Tunisia, Jordan and Egypt. Measurement of TFP can be done using non-frontier and/or frontier approaches. Non frontier approaches include growth accounting methods (or non parametric index-based methods) and econometric parametric approaches. Frontier approaches include the non-parametric Malmquist index methodology and the stochastic production frontier method; which is a parametric approach. The presentation of these different methodologies will be provided in this working paper.