Partnerships for Unlocking Potentials in Groundnut Value Chains in Zimbabwe 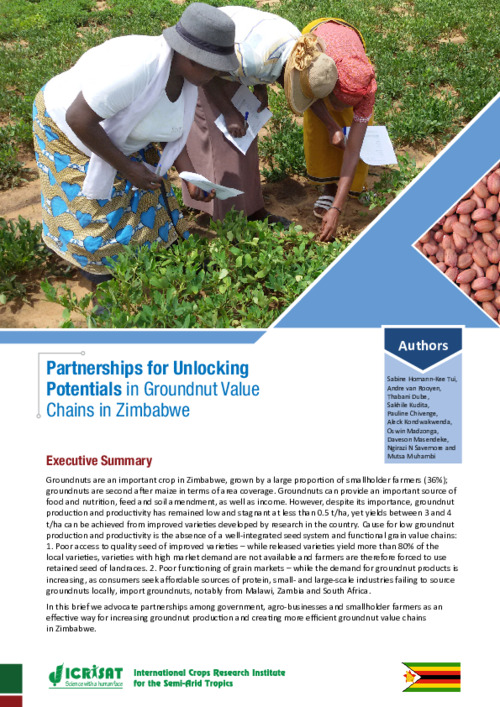 Groundnuts are an important crop in Zimbabwe, grown by a large proportion of smallholder farmers (36%); groundnuts are second after maize in terms of area coverage. Groundnuts can provide an important source of food and nutrition, feed and soil amendment, as well as income. However, despite its importance, groundnut production and productivity has remained low and stagnant at less than 0.5 t/ha, yet yields between 3 and 4 t/ha can be achieved from improved varieties developed by research in the country. Cause for low groundnut production and productivity is the absence of a well-integrated seed system and functional grain value chains: 1. Poor access to quality seed of improved varieties – while released varieties yield more than 80% of the local varieties, varieties with high market demand are not available and farmers are therefore forced to use retained seed of landraces. 2. Poor functioning of grain markets – while the demand for groundnut products is increasing, as consumers seek affordable sources of protein, small- and large-scale industries failing to source groundnuts locally, import groundnuts, notably from Malawi, Zambia and South Africa. In this brief we advocate partnerships among government, agro-businesses and smallholder farmers as an effective way for increasing groundnut production and creating more efficient groundnut value chains in Zimbabwe.