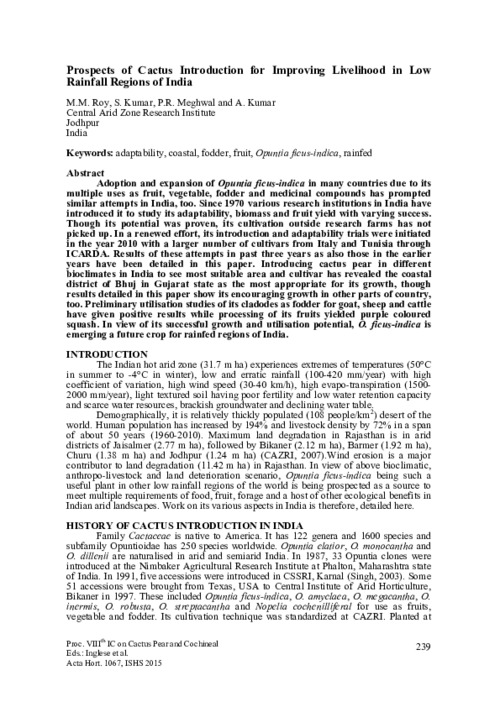 Adoption and expansion of Opuntia ficus-indica in many countries due to its multiple uses as fruit, vegetable, fodder and medicinal compounds has prompted similar attempts in India, too. Since 1970 various research institutions in India have introduced it to study its adaptability, biomass and fruit yield with varying success. Though its potential was proven, its cultivation outside research farms has not picked up. In a renewed effort, its introduction and adaptability trials were initiated in the year 2010 with a larger number of cultivars from Italy and Tunisia through ICARDA. Results of these attempts in past three years as also those in the earlier years have been detailed in this paper. Introducing cactus pear in different bioclimates in India to see most suitable area and cultivar has revealed the coastal district of Bhuj in Gujarat state as the most appropriate for its growth, though results detailed in this paper show its encouraging growth in other parts of country, too. Preliminary utilisation studies of its cladodes as fodder for goat, sheep and cattle have given positive results while processing of its fruits yielded purple coloured squash. In view of its successful growth and utilisation potential, O. ficus-indica is emerging a future crop for rainfed regions of India.