Sorghum in Semi-arid Subsistence Agriculture: The Case of Central Mozambique 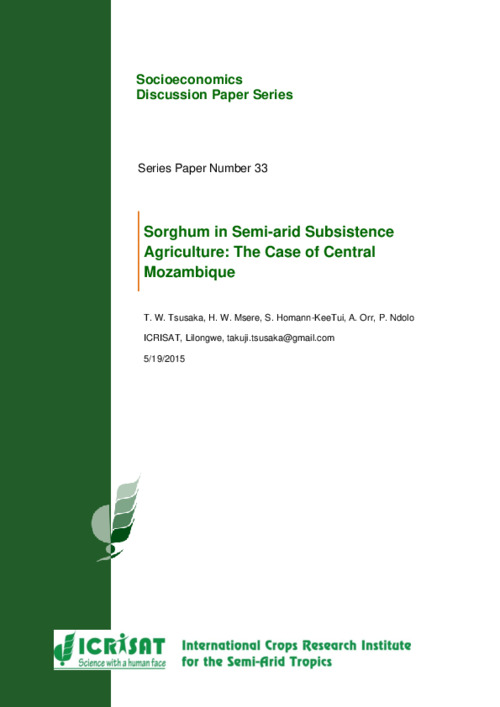 Based on the recommendations from the 2013 sorghum scoping study in Mozambique, a focused survey on smallholder sorghum growers was conducted in Marara District, Tete Province, Mozambique, during September 2014, funded by the CGIAR Program for Dryland cereals. 142 households were interviewed, which is a subsample of the 2013 MOREP survey funded by the Austrian Development Agency and CRP Dryland Systems. The study characterizes the current practices of sorghum and pearl millet farming in the area, in terms of use of inputs and outputs, cropping patterns, and profitability of sorghum and pearl millet in comparison with maize. It is found that the marginalized production environment in the studied villages is not appropriate for maize-dependent farming, but sorghum and pearl millet perform fairly. The benefit-cost analysis reveals that sorghum and pearl millet are increasingly advantageous over maize in more marginalized environments, for the given set of agro-ecology and technologies. On the other hand, the major constraints to production of these crops are frequent recycling of seeds, bird pests, and lack of integration with livestock farming. Some gender gap in rates of improved varieties adoption is also observed. The estimated production function indicates that there may be growth potential for sorghum in increasing the seed rate, while the marginal product of labor seems to have reached nil, suggesting the abundance of labor in subsistence agriculture. It is noted that consumers in the Central Zone have different habits of cooking and eating sorghum, as compared with Northern Zone. Sorghum is pounded and cooked into hard porridge in the Central Zone while it is consumed like a rice dish in the Northern Zone. Only a small share of sorghum and pearl millet production is sold. Engagement in off-farm activities and distance to markets are two factors that are likely to affect the likelihood of participation in sorghum commercialization. One notable way sorghum is marketed is in the form of beer, produced primarily by women at household level. A set of R&D activities are recommended with respect to smallholders’ capacity development and seed adaptation research. Training programs for capacity development need to cover the following subjects: (1) seed quality, (2) seed rate, (3) bird control, (4) crop-livestock integration, and (5) access to markets. The crop improvement efforts need to address the following aspects: (1) location-specific adaptation of grain quality to suit the local dietary habit, (2) grain taste adjustment to incorporate consumers’ general preference for maize porridge to sorghum and pearl millet porridge, and (3) developing sorghum varieties with good malting qualities