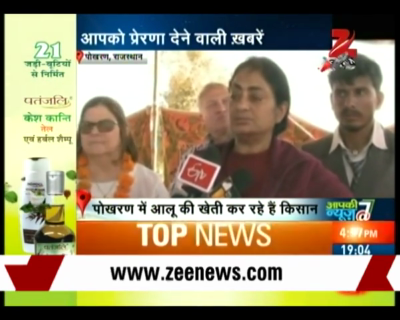 Potato in Rajasthan 1.Background given by Zee News:- (translated from Hindi to English) Pokharan is well known for atomic tests but if we say that farmers at Pokharan are growing potatoes then everyone will be surprised. But this is true! The farmers of Didoo village at Jaisalmer, Rajasthan are growing potatoes with the help of International Potato Center. The crop will be ready within few weeks. When one mentions about Jaisalmer in Rajasthan one just thinks about sandy fields and Pokharan reminds of atomic tests only. Farming or greenery were dreams only. No farmers of Pokharan have started fighting with deserts and with International Potato Center they are experimenting to grow potato. Almost 2 months back 14 farmers have planted potato on their acre of land each. Agricultural scientists are saying the crop is good. 2. By Sushma spoken in Hindi (translated from Hindi to English) “In Jaisalmer Agriculture is subsistence based with very low margins. But potato is a crop which can fetch good profits for the farmers at Didoo, Jaisalmer. The soil and temperatures of Jaisalmer are very favourable for growing potatoes.” The International Scientists also visited the standing crop of potato at Jaisalmer they encouraged and congratulated the farmers for having taken a step towards growing potatoes. “The farmers here are growing potatoes for very first time which is a fresh breath”. 3. (DG-Dr. Barbara Wells)- talked in English so not written here. 4. Text added by Zee (translated Hindi to English) : Today scientists are saying that the lands of Pokharan are very suitable for potato cultivation but there was a time n 1974 when Atomic tests were conducted at Pokharan and crops got spoiled, Soils were affected. People were affected and they complained of cancer, skin disease and genetic disorders. These tests affected the cultivable fields. Today on the same fields the crop of potato is being grown and the crop is so green and robust. After a few weeks the crop will mature and will be ready for harvesting. This will show a new path to the farmers of Jaisalmer.