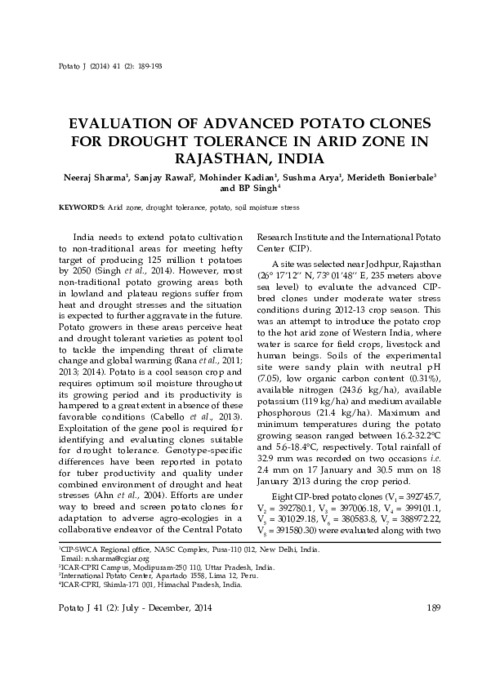 Potato is a cool season crop and requires optimum soil moisture throughout its growing period and its productivity is hampered to a great extent in absence of these favorable conditions (Cabello et al., 2013). Exploitation of the gene pool is required for identifying and evaluating clones suitable for drought tolerance. Genotype-specific differences have been reported in potato for tuber productivity and quality under combined environment of drought and heat stresses (Ahn et al., 2004). Efforts are under way to breed and screen potato clones for adaptation to adverse agro-ecologies in a collaborative endeavor of the Central Potato Research Institute and the International Potato Center (CIP). A site was selected near Jodhpur, Rajasthan (26° 17’12’’ N, 73° 01’48’’ E, 235 meters above sea level) to evaluate the advanced CIPbred clones under moderate water stress conditions during 2012-13 crop season. This was an attempt to introduce the potato crop to the hot arid zone of Western India, where water is scarce for field crops, livestock and human beings. Ultimately, among CIP clones 397006.18 was found promising based upon its overall yield performance, drought tolerance and acceptability of texture and taste.