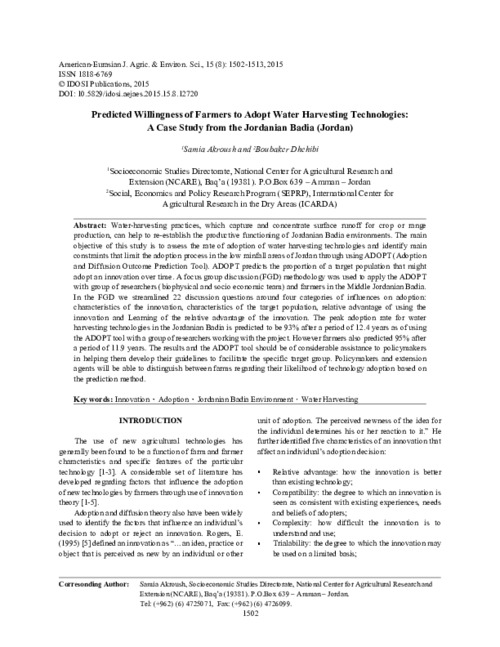 Water-harvesting practices, which capture and concentrate surface runoff for crop or range production, can help to re-establish the productive functioning of Jordanian Badia environments. The main objective of this study is to assess the rate of adoption of water harvesting technologies and identify main constraints that limit the adoption process in the low rainfall areas of Jordan through using ADOPT (Adoption and Diffusion Outcome Prediction Tool). ADOPT predicts the proportion of a target population that might adopt an innovation over time. A focus group discussion (FGD) methodology was used to apply the ADOPT with group of researchers (biophysical and socio economic team) and farmers in the Middle Jordanian Badia. In the FGD we streamlined 22 discussion questions around four categories of influences on adoption: characteristics of the innovation, characteristics of the target population, relative advantage of using the innovation and Learning of the relative advantage of the innovation. The peak adoption rate for water harvesting technologies in the Jordanian Badia is predicted to be 93% after a period of 12.4 years as of using the ADOPT tool with a group of researchers working with the project. However farmers also predicted 95% after a period of 11.9 years. The results and the ADOPT tool should be of considerable assistance to policymakers in helping them develop their guidelines to facilitate the specific target group. Policymakers and extension agents will be able to distinguish between farms regarding their likelihood of technology adoption based on the prediction method.