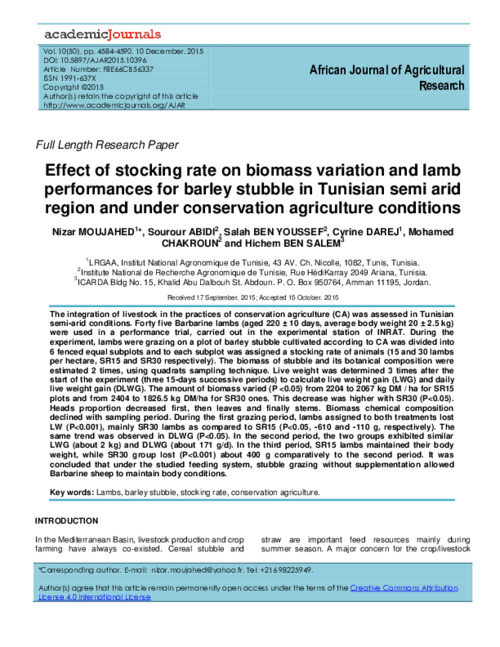 The integration of livestock in the practices of conservation agriculture (CA) was assessed in Tunisian semi-arid conditions. Forty five Barbarine lambs (aged 220 ± 10 days, average body weight 20 ± 2.5 kg) were used in a performance trial, carried out in the experimental station of INRAT. During the experiment, lambs were grazing on a plot of barley stubble cultivated according to CA was divided into 6 fenced equal subplots and to each subplot was assigned a stocking rate of animals (15 and 30 lambs per hectare, SR15 and SR30 respectively). The biomass of stubble and its botanical composition were estimated 2 times, using quadrats sampling technique. Live weight was determined 3 times after the start of the experiment (three 15-days successive periods) to calculate live weight gain (LWG) and daily live weight gain (DLWG). The amount of biomass varied (P <0.05) from 2204 to 2067 kg DM / ha for SR15 plots and from 2404 to 1826.5 kg DM/ha for SR30 ones. This decrease was higher with SR30 (P<0.05). Heads proportion decreased first, then leaves and finally stems. Biomass chemical composition declined with sampling period. During the first grazing period, lambs assigned to both treatments lost LW (P<0.001), mainly SR30 lambs as compared to SR15 (P<0.05, -610 and -110 g, respectively). The same trend was observed in DLWG (P<0.05). In the second period, the two groups exhibited similar LWG (about 2 kg) and DLWG (about 171 g/d). In the third period, SR15 lambs maintained their body weight, while SR30 group lost (P<0.001) about 400 g comparatively to the second period. It was concluded that under the studied feeding system, stubble grazing without supplementation allowed Barbarine sheep to maintain body conditions.