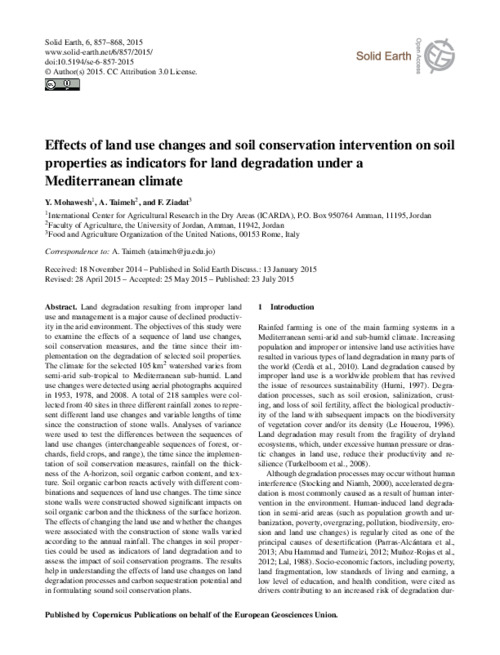 Land degradation resulting from improper land use and management is a major cause of declined productivity in the arid environment. The objectives of this study were to examine the effects of a sequence of land use changes, soil conservation measures, and the time since their implementation on the degradation of selected soil properties. The climate for the selected 105 km2 watershed varies from semi-arid sub-tropical to Mediterranean sub-humid. Land use changes were detected using aerial photographs acquired in 1953, 1978, and 2008. A total of 218 samples were collected from 40 sites in three different rainfall zones to represent different land use changes and variable lengths of time since the construction of stone walls. Analyses of variance were used to test the differences between the sequences of land use changes (interchangeable sequences of forest, orchards, field crops, and range), the time since the implementation of soil conservation measures, rainfall on the thickness of the A-horizon, soil organic carbon content, and texture. Soil organic carbon reacts actively with different combinations and sequences of land use changes. The time since stone walls were constructed showed significant impacts on soil organic carbon and the thickness of the surface horizon. The effects of changing the land use and whether the changes were associated with the construction of stone walls varied according to the annual rainfall. The changes in soil properties could be used as indicators of land degradation and to assess the impact of soil conservation programs. The results help in understanding the effects of land use changes on land degradation processes and carbon sequestration potential and in formulating sound soil conservation plans.