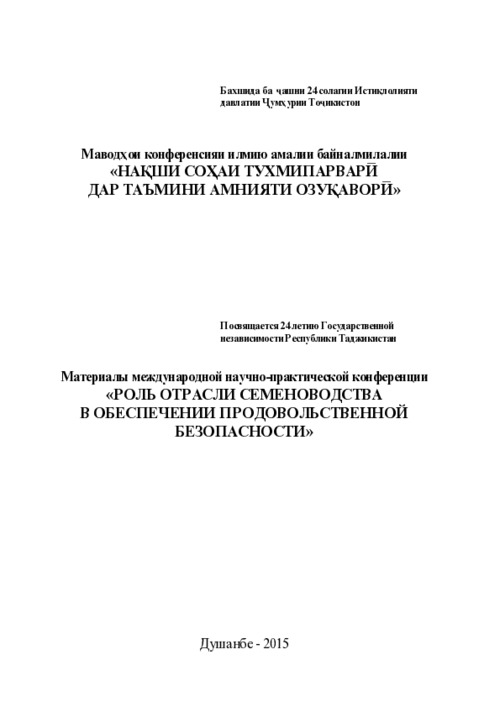 CA is the new approach not only for integrated crop-livestock conservation agriculture but also as CA itself. There is a little knowledge about CA in Tajikistan especially on its effect of economic assessment on cost-benefit ratio of crop-livestock CA. Economic assessment of CA technologies in Central Asian countries shows that there are no significant effects of reduced soil disturbance on cotton or wheat yields. In Uzbekistan, the initial yield loss that allegedly occurs when introducing CA was not observed, while savings in operational costs were achieved immediately (Egamberdiev, 2007; Tursunov, 2009). Sydyk et al., 2009 reported that introduction of CA technologies has been shown to lower production cost, raise profitability of winter wheat production and accordingly facilitate sustainable development of agriculture in different forms of agricultural entities in the south of Kazakhstan. Although the findings from the research on CA for the irrigated areas in Central Asia are encouraging, there are few reports on the economic aspects of CA. This is particularly important since the economic profitability of CA practices varies over time and, like any production system, can be site-specific, which necessitates sitespecific analyses (Knowler et al., 2001). Furthermore, CA practices regularly require long-term investments (e.g. in direct seeders and planters), but it is unrealistic to expect that capital investments for increasing the efficiency of natural resources use will alone be sufficient for convincing farmers to switch from tillage-based agriculture to CA (Knowler et al., 2001). Taking above mentioned literature review into account objective of this activity was defined. There was a homogenous of the surveyed farmers in respect to their experience in CA as 90% of them had not any experience with CA, while some had a little understanding with conservation agriculture practices. In Tajikistan, some elements of CA can be found within several donor funded projects implemented in the past, but their geographic coverage and number of beneficiaries (mostly farmers) are relatively small. In order to create awareness about conservation agriculture in Tajikistan to meet these challenges, three training courses organized for researchers and farmers.