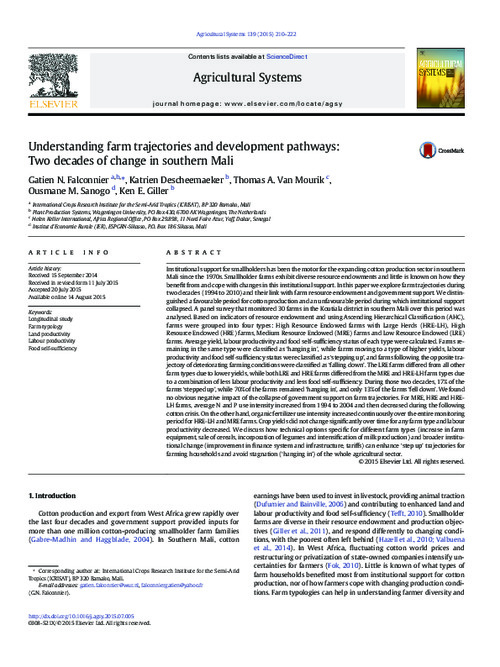 Institutional support for smallholders has been themotor for the expanding cotton production sector in southern Mali since the 1970s. Smallholder farms exhibit diverse resource endowments and little is known on how they benefit fromand copewith changes in this institutional support. In this paperwe explore farm trajectories during two decades (1994 to 2010) and their link with farm resource endowment and government support. We distinguished a favourable period for cotton production and an unfavourable period duringwhich institutional support collapsed. A panel survey that monitored 30 farms in the Koutiala district in southern Mali over this period was analysed. Based on indicators of resource endowment and using Ascending Hierarchical Classification (AHC), farms were grouped into four types: High Resource Endowed farms with Large Herds (HRE-LH), High Resource Endowed (HRE) farms, Medium Resource Endowed (MRE) farms and Low Resource Endowed (LRE) farms. Average yield, labour productivity and food self-sufficiency status of each type were calculated. Farms remaining in the same type were classified as ‘hanging in’, while farms moving to a type of higher yields, labour productivity and food self-sufficiency status were classified as ‘stepping up’, and farms following the opposite trajectory of deteriorating farming conditionswere classified as ‘falling down’. The LRE farms differed fromall other farm types due to lower yields,while both LRE and HRE farms differed fromthe MRE and HRE-LH farm types due to a combination of less labour productivity and less food self-sufficiency. During those two decades, 17% of the farms ‘stepped up’,while 70% of the farms remained ‘hanging in’, and only 13% of the farms ‘fell down’.We found no obvious negative impact of the collapse of government support on farm trajectories. For MRE, HRE and HRELH farms, average N and P use intensity increased from 1994 to 2004 and then decreased during the following cotton crisis.On the other hand, organic fertilizer use intensity increased continuously over the entiremonitoring period forHRE-LH andMRE farms. Crop yields did not change significantly over time for any farm type and labour productivity decreased. We discuss how technical options specific for different farm types (increase in farm equipment, sale of cereals, incorporation of legumes and intensification of milk production) and broader institutional change (improvement in finance system and infrastructure, tariffs) can enhance ‘step up’ trajectories for farming households and avoid stagnation (‘hanging in’) of the whole agricultural sector.