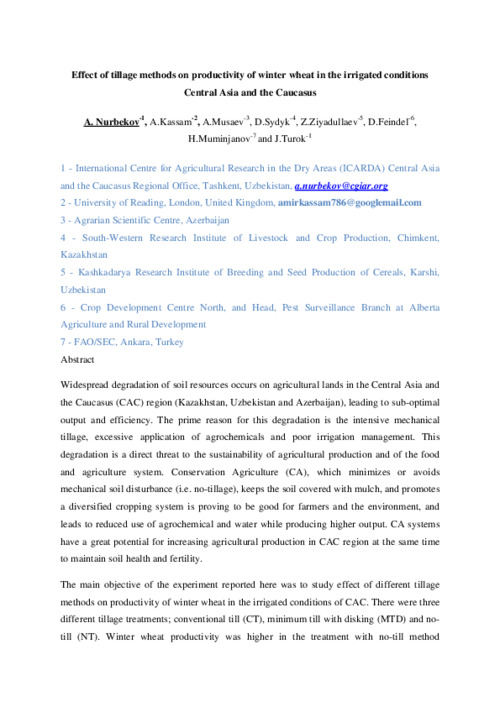 Widespread degradation of soil resources occurs on agricultural lands in the Central Asia and the Caucasus (CAC) region (Kazakhstan, Uzbekistan and Azerbaijan), leading to sub-optimal output and efficiency. The prime reason for this degradation is the intensive mechanical tillage, excessive application of agrochemicals and poor irrigation management. This degradation is a direct threat to the sustainability of agricultural production and of the food and agriculture system. Conservation Agriculture (CA), which minimizes or avoids mechanical soil disturbance (i.e. no-tillage), keeps the soil covered with mulch, and promotes a diversified cropping system is proving to be good for farmers and the environment, and leads to reduced use of agrochemical and water while producing higher output. CA systems have a great potential for increasing agricultural production in CAC region at the same time to maintain soil health and fertility. The main objective of the experiment reported here was to study effect of different tillage methods on productivity of winter wheat in the irrigated conditions of CAC. There were three different tillage treatments; conventional till (CT), minimum till with disking (MTD) and no-till (NT). Winter wheat productivity was higher in the treatment with no-till method compared to other treatments across all the countries. The absolute highest yield of 6.71 t ha-1 was recorded in the no-till treatment in 2013 in Uzbekistan while in conventional tillage the maximum yield was 6.54 t ha-1 also in Uzbekistan in 2012. The lowest grain yield (4.7 t ha-1) was recorded under conventional till in Kazakhstan. This is in line with Nurbekov et al. (2012) where it is reported that no-till winter wheat crop had a higher yield compared to conventional and minimum till crop yields. There are also a number of changes which take place in the no-till soil that leads to improved soil functions.