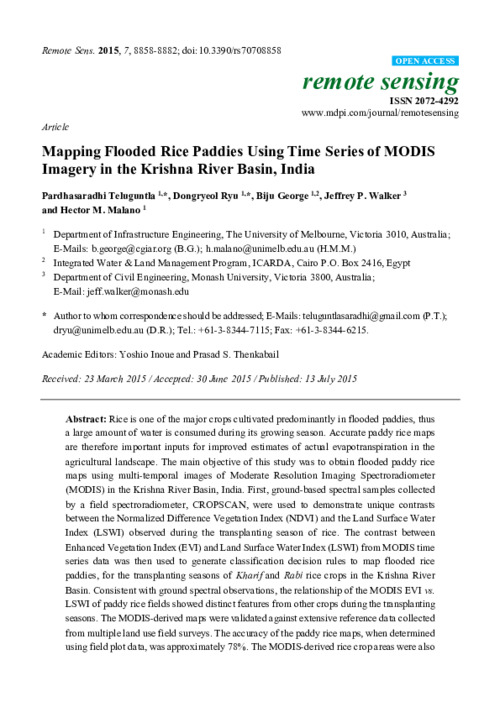 Rice is one of the major crops cultivated predominantly in flooded paddies, thus a large amount of water is consumed during its growing season. Accurate paddy rice maps are therefore important inputs for improved estimates of actual evapotranspiration in the agricultural landscape. The main objective of this study was to obtain flooded paddy rice maps using multi-temporal images of Moderate Resolution Imaging Spectroradiometer (MODIS) in the Krishna River Basin, India. First, ground-based spectral samples collected by a field spectroradiometer, CROPSCAN, were used to demonstrate unique contrasts between the Normalized Difference Vegetation Index (NDVI) and the Land Surface Water Index (LSWI) observed during the transplanting season of rice. The contrast between Enhanced Vegetation Index (EVI) and Land Surface Water Index (LSWI) from MODIS time series data was then used to generate classification decision rules to map flooded rice paddies, for the transplanting seasons of Kharif and Rabi rice crops in the Krishna River Basin. Consistent with ground spectral observations, the relationship of the MODIS EVI vs. LSWI of paddy rice fields showed distinct features from other crops during the transplanting seasons. The MODIS-derived maps were validated against extensive reference data collected from multiple land use field surveys. The accuracy of the paddy rice maps, when determined using field plot data, was approximately 78%. The MODIS-derived rice crop areas were also India (Government Statistics). The estimated root mean square difference (RMSD) of rice area estimated using MODIS and those reported by the Department of Agriculture over 10 districts varied between 3.4% and 6.6% during 10 years of our study period. Some of the major factors responsible for this difference include high noise of the MODIS images during the prolonged monsoon seasons (typically June–October) and the coarse spatial resolution (500 m) of the MODIS images compared to the small crop fields in the basin. However, this study demonstrates, based on multi-year analysis, that MODIS images can still provide robust and consistent flooded paddy rice extent and areas over a highly heterogeneous large river basin.