Spatial characterization of colonies of the flying fox bat, a carrier of Nipah Virus in Thailand 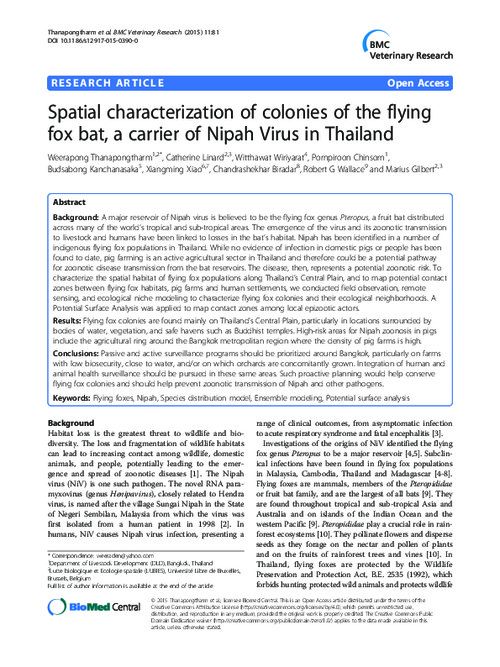 A major reservoir of Nipah virus is believed to be the flying fox genus Pteropus, a fruit bat distributed across many of the world’s tropical and sub-tropical areas. The emergence of the virus and its zoonotic transmission to livestock and humans have been linked to losses in the bat’s habitat. Nipah has been identified in a number of indigenous flying fox populations in Thailand. While no evidence of infection in domestic pigs or people has been found to date, pig farming is an active agricultural sector in Thailand and therefore could be a potential pathway for zoonotic disease transmission from the bat reservoirs. The disease, then, represents a potential zoonotic risk. To characterize the spatial habitat of flying fox populations along Thailand’s Central Plain, and to map potential contact zones between flying fox habitats, pig farms and human settlements, we conducted field observation, remote sensing, and ecological niche modeling to characterize flying fox colonies and their ecological neighborhoods. A Potential Surface Analysis was applied to map contact zones among local epizootic actors.