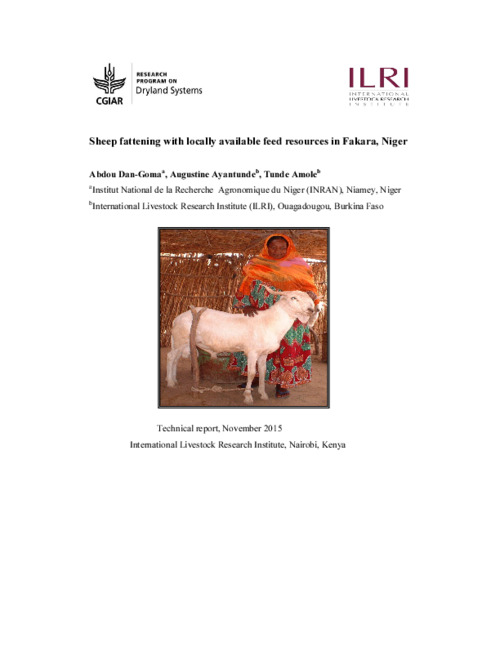 In West African Sahel, livestock form one of the main livelihood strategies of the rural population playing a cardinal role in food security and income generation (Hiernaux and Ayantunde, 2004). In 2014, the livestock population in Niger was estimated at 41 million heads including all species (cattle, sheep, goat and camel). Livestock is Niger’s second source of revenue after mining resources contributing to 11% of national GDP and involving 87% of the rural population in the country. Despite its socio-economic and cultural importance, livestock production in the Sahel is largely characterized by low external inputs and heavily dependent on rainfall which varies markedly from year to year. Feed scarcity, particularly in the dry season and low nutritional quality are the main causes of low livestock productivity in the region. Sheep fattening based on locally available feed resources has been promoted in the Sahel as a way to improve income of rural households and food security. Based on previous studies by ILRI in Niger, this activity was conducted under CRP Dryland Systems for Kano-Katsina-Maradi action transect in West African Sahel and Dryland Savanna. The sheep fattening scheme was designed for youth and women in Fakara, Niger towards the Tabaski of September 2015. The objectives of the study were: (i) To improve income of rural households through least cost rations for sheep fattening in the late dry season. (ii) To promote better use of locally available feed resources for livestock productivity.