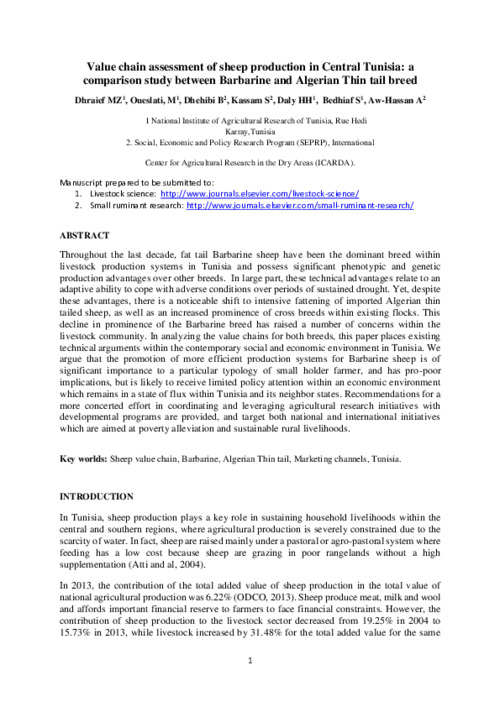 Throughout the last decade, fat tail Barbarine sheep have been the dominant breed within livestock production systems in Tunisia and possess significant phenotypic and genetic production advantages over other breeds. In large part, these technical advantages relate to an adaptive ability to cope with adverse conditions over periods of sustained drought. Yet, despite these advantages, there is a noticeable shift to intensive fattening of imported Algerian thin tailed sheep, as well as an increased prominence of cross breeds within existing flocks. This decline in prominence of the Barbarine breed has raised a number of concerns within the livestock community. In analyzing the value chains for both breeds, this paper places existing technical arguments within the contemporary social and economic environment in Tunisia. We argue that the promotion of more efficient production systems for Barbarine sheep is of significant importance to a particular typology of small holder farmer, and has pro-poor implications, but is likely to receive limited policy attention within an economic environment which remains in a state of flux within Tunisia and its neighbor states. Recommendations for a more concerted effort in coordinating and leveraging agricultural research initiatives with developmental programs are provided, and target both national and international initiatives which are aimed at poverty alleviation and sustainable rural livelihoods.