Improving a Transhumance Livestock System of India with Modern Technologies 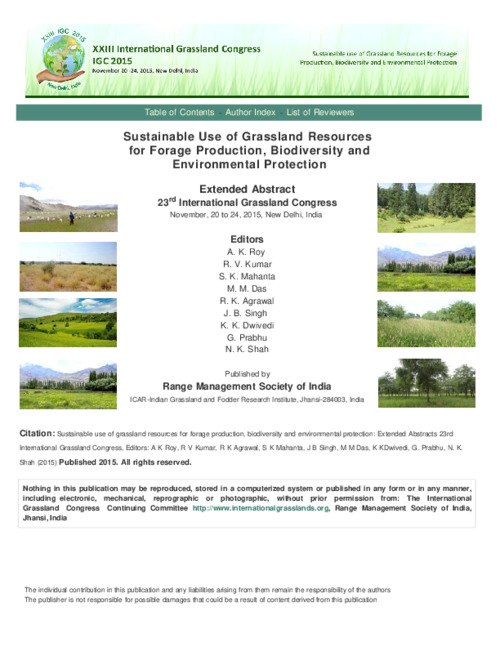 Traditional livestock rearing systems in grasslands evolved in response to social, climatic, vegetative and technological conditions that existed scores, hundreds, or in some cases thousands of years ago. Many of these systems involve vertical transhumance where flocks and herds are moved up elevation gradients for summer pasturage or horizontal transhumance in which livestock migrate across greater distances in response to regional rainfall patterns and the resulting availability of forage. In spite of the relatively low earnings of individual herders, these pastoral systems can contribute substantially to the national economies, while providing sustenance and food security to significant portions of the population. Additionally, traditional livestock rearing often contributes a rich social culture in regions where it is practiced and many societies closely identify with traditional livestock herding lifestyles. In many parts of the world herders still use traditional transhumance systems but they are coming under increased pressure from a number of forces both within and external to these societies. Yet, many rural people living at or near the subsistence level still rely heavily on small flocks or herds that migrate for their livelihoods. These traditional pastoral or agro pastoral systems and the people that use them have an opportunity to employ modern technologies to change and improve with developing technologies. We studied the Indian Raika (Dewasi/Rebari) horizontal transhumance system of sheep and cattle from their home villages in western Rajasthan to the regions of Haryana and Delhi (Malhotra & Mann1982, Kavoori 2005). During this project we attempted to understand the constraints to production, techniques that could increase animal health and family income of herders. One of the main goals of the project was to also identify programmatic opportunities whereby information at the national or international level could be used to improve sustainability and efficiency of movement from one grazing location to another.