Pastoral Land Use and Grazing Measurement through Remotely Sensed Data 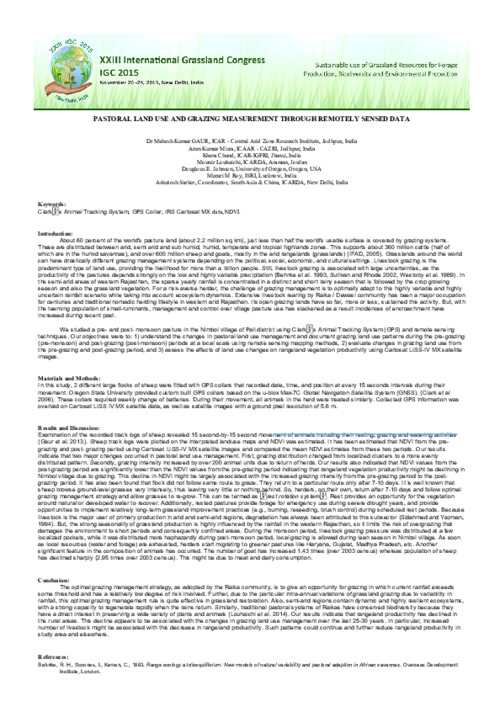 About 60 percent of the world's pasture land (about 2.2 million sq km), just less than half the world's usable surface is covered by grazing systems. These are distributed between arid, semi arid and sub humid, humid, temperate and tropical highlands zones. This supports about 360 million cattle (half of which are in the humid savannas), and over 600 million sheep and goats, mostly in the arid rangelands (grasslands) (IFAD, 2005). Grasslands around the world can have drastically different grazing management systems depending on the political, social, economic, and cultural settings. Livestock grazing is the predominant type of land use, providing the livelihood for more than a billion people. Still, livestock grazing is associated with large uncertainties, as the productivity of the pastures depends strongly on the low and highly variable precipitation (Behnke et al. 1993, Sullivan and Rhode 2002, Westoby et al. 1989). In the semi-arid areas of western Rajasthan, the sparse yearly rainfall is concentrated in a distinct and short rainy season that is followed by the crop growing season and also the grassland vegetation. For a risk-averse herder, the challenge of grazing management is to optimally adapt to this highly variable and highly uncertain rainfall scenario while taking into account ecosystem dynamics. Extensive livestock rearing by Raika / Dewasi community has been a major occupation for centuries and traditional nomadic herding lifestyle in western arid Rajasthan. Its open grazing lands have so far, more or less, sustained this activity. But, with the teeming population of small-ruminants, management and control over village pasture use has slackened as a result incidence of encroachment have increased during recent past. We studied a pre- and post- monsoon pasture in the Nimbol village of Pali district using Clark’s Animal Tracking System (GPS) and remote sensing techniques. Our objectives were to: 1) understand the changes in pastoral land use management and document grazing land use patterns during the pre-grazing (pre-monsoon) and post-grazing (post-monsoon) periods at a local scale using remote sensing mapping methods, 2) evaluate changes in grazing land use from the pre-grazing and post-grazing period, and 3) assess the effects of land use changes on rangeland vegetation productivity using Cartosat LISS-IV MX satellite images.