Improving the livelihoods of dryland farmers through the introduction of potato cropping: a proposal based on detailed SWOT analysis 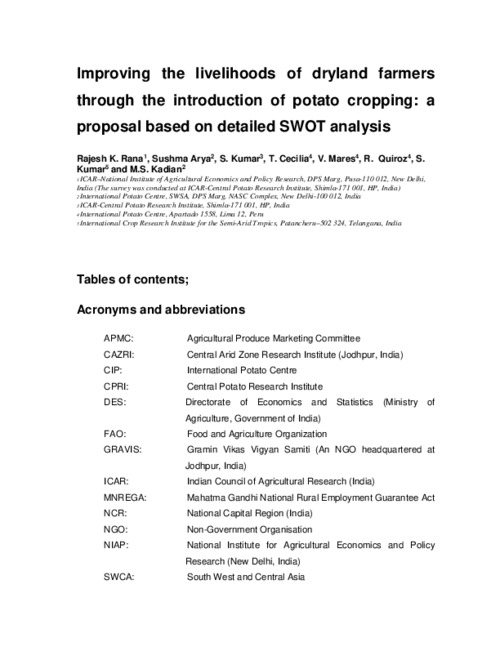 FAO has identified potato as a crop for ensuring future food security for the global poor, particularly in the developing countries. Strength of this analysis was demonstrated in India during 2003 and 2013 in terms of tremendous growth in potato production, productivity and area. Further, India aims to produce 125 million t potatoes (45.34 million t during 2013) by the year 2050 for ensuring food security of its natives. However, potato production in India has been regional in nature and farmers in non-traditional areas wish to cultivate potatoes for augmenting their farm incomes in order to meet their fast increasing family expenses. Rajasthan, an arid area dominated state, is not an important producer of potatoes and whatever production of the crop is harvested in the state majority of it (nearly 85%) falls in districts adjoining to major potato producing states. Jodhpur district of the state is not at all known at state level as a potato producing district. However, International Potato Centre (SWCA), New Delhi has identified some potential locations where potato cultivation can be successfully introduced. A survey study was carried out in February 2015 in the selected villages of the state for assessing detailed socio-economic and agro-climatic feasibility of introducing potato crop in the area for socio-economic upliftment of the farmers. For this study 110 respondents were interviewed from four villages out of which two villages were the action villages under Dryland Systems Consortium Research Program (CRP 1.1).