Sustainable intensification in drylands: What resilience and vulnerability can tell us 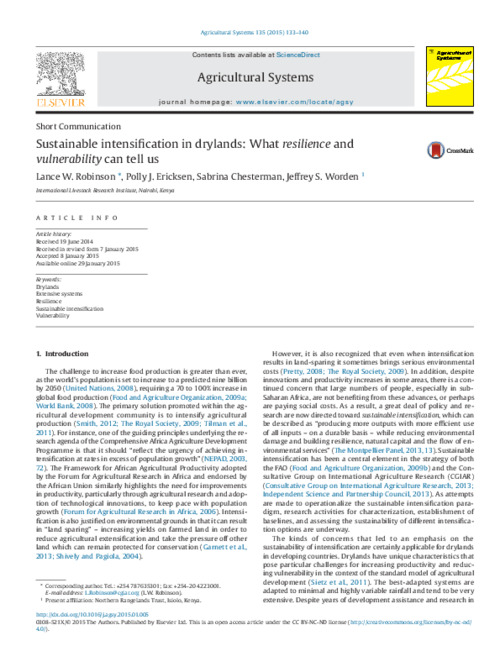 The challenge to increase food production is greater than ever, as the world’s population is set to increase to a predicted nine billion by 2050 (United Nations, 2008), requiring a 70 to 100% increase in global food production (Food and Agriculture Organization, 2009a; World Bank, 2008). The primary solution promoted within the agricultural development community is to intensify agricultural production (Smith, 2012; The Royal Society, 2009; Tilman et al., 2011). For instance, one of the guiding principles underlying the research agenda of the Comprehensive Africa Agriculture Development Programme is that it should “reflect the urgency of achieving intensification at rates in excess of population growth” (NEPAD, 2003, 72). The Framework for African Agricultural Productivity adopted by the Forum for Agricultural Research in Africa and endorsed by the African Union similarly highlights the need for improvements in productivity, particularly through agricultural research and adoption of technological innovations, to keep pace with population growth (Forum for Agricultural Research in Africa, 2006). Intensification is also justified on environmental grounds in that it can result in “land sparing” – increasing yields on farmed land in order to reduce agricultural extensification and take the pressure off other land which can remain protected for conservation (Garnett et al., 2013; Shively and Pagiola, 2004). However, it is also recognized that even when intensification results in land-sparing it sometimes brings serious environmental costs (Pretty, 2008; The Royal Society, 2009). In addition, despite innovations and productivity increases in some areas, there is a continued concern that large numbers of people, especially in sub- Saharan Africa, are not benefiting from these advances, or perhaps are paying social costs. As a result, a great deal of policy and research are now directed toward sustainable intensification, which can be described as “producing more outputs with more efficient use of all inputs – on a durable basis – while reducing environmental damage and building resilience, natural capital and the flow of environmental services” (The Montpellier Panel, 2013, 13). Sustainable intensification has been a central element in the strategy of both the FAO (Food and Agriculture Organization, 2009b) and the Consultative Group on International Agriculture Research (CGIAR) (Consultative Group on International Agriculture Research, 2013; Independent Science and Partnership Council, 2013). As attempts are made to operationalize the sustainable intensification paradigm, research activities for characterization, establishment of baselines, and assessing the sustainability of different intensification options are underway.