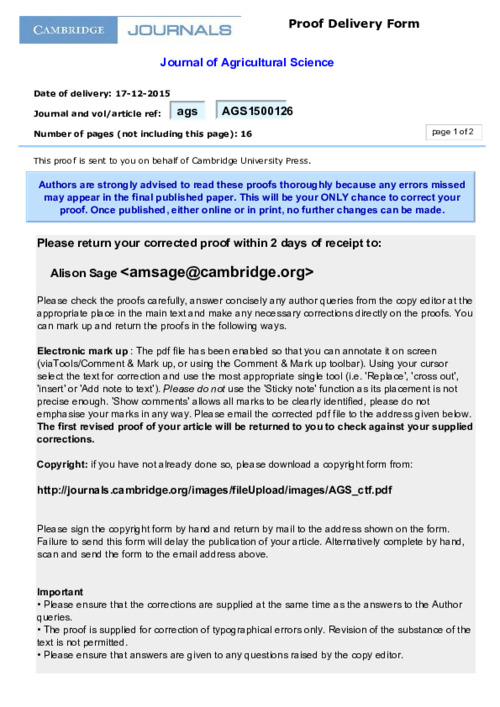 In search of a suitable resource conservation technology under pigeonpea (Cajanus cajan L.)–wheat (Triticum aestivum L.) system in the Indo-Gangetic Plains, the effects of conservation agriculture (CA) on crop productivity and water-use efficiency (WUE) were evaluated during a 3-year study. The treatments were: conventional tillage (CT), zero tillage (ZT) with planting on permanent narrow beds (PNB), PNB with residue (PNB + R), ZT with planting on permanent broad beds (PBB) and PBB + R. The PBB + R plots had higher pigeonpea grain yield than the CT plots in all 3 years. However, wheat grain yields under all plots were similar in all years except for PBB + R plots in the second year, which had higher wheat yield than CT plots. The contrast analysis showed that pigeonpea grain yield of CA plots was significantly higher than CT plots in the first year. However, both pigeonpea and wheat grain yields during the last 2 years under CA and CT plots were similar. The PBB + R plots had higher system WUE than the CT plots in the second and third years. Plots under CA had significantly higher WUE and significantly lower water use than CT plots in these years. The PBB + R plots had higher WUE than PNB + R and PNB plots. Also, the PBB plots had higher WUE than PNB in the second and third years, despite similar water use. The interactions of bed width and residue management for all parameters in the second and third years were not significant. Those positive impacts under PBB + R plots over CT plots were perceived to be due to no tillage and significantly higher amount of estimated residue retention. Thus, both PBB and PBB + R technologies would be very useful under a pigeonpea–wheat cropping system in this region.