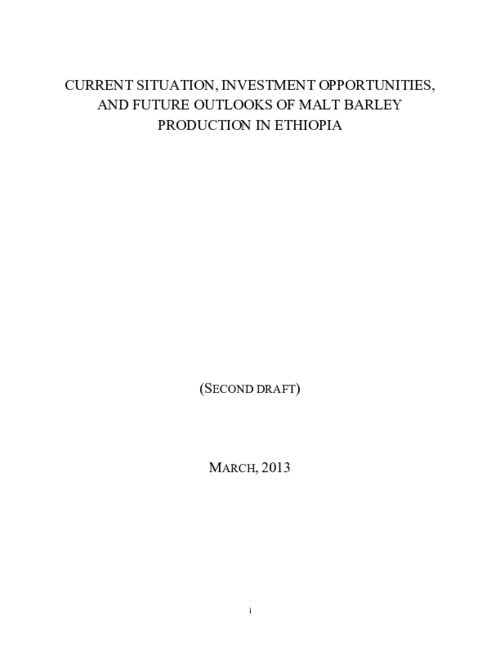 This study assesses the current situation and identifies opportunities and constraints along the malt barley value chain in Ethiopia. The future prospects of malt barley production, processing and marketing in line with the booming brewing industry and investment opportunities in the country are also explored. The paper also makes a thorough review of relevant literature and analysis of secondary data to address the major issues prevailing in the malt barley value chain and to make projections about the future. Barley is the fifth most important cereal crop in Ethiopia produced on about 1 million hectares of land from which 1.78 million tons of grain is produced annually (CSA, 2013). However, the share of malt barley is small estimated at 7 % of the total annual production. Currently, the cultivation of malt barley is mainly concentrated in the highlands of Arsi, West Arsi and Bale administrative zones of the Oromia Regional State. Despite, its limited cultivation, malt barley represents an attractive market opportunity for smallholder farmers in the highlands where cold temperature limits the possibility of successfully growing alternative cash crops. Malt barley is among the priority commodities that have attracted the attention of policy makers in Ethiopia. The government is keen to boost production of malt barley through appropriately supporting smallholder farmers and attracting commercial farming. Recently, through a public - private partnership involving the Ethiopian Institute of Agricultural Research (EIAR), Assela Malt Factory (AMF) and four breweries (BGI, Meta Abo, Harar and Bedele), a lot of effort is being exerted to boost malt barley production by strengthening malt barley research and scaling up of available malt barley technologies. As a result, notable progress has been made in raising production in the project areas of the Central Highlands, Bale and Arsi. Both area expansion and improvements in productivity have been the major drivers for the increase in production. Despite all efforts, however, malt barley production is still restricted to few areas and productivity is much below the potential. Even in the traditional malt producing areas of the country, much of the malt grain produced is locally consumed mainly due to limited infrastructure and unattractive prices offered in the local market to the large amount of malt barley which is rejected by the AMF for failing to meet the high quality standards. The malt barley sub-sector in Ethiopia is not yet well developed. The Assella Malt Factory (AMF) is the only institution engaged in the processing and marketing of malt grain in Ethiopia. Recently, investment on breweries has increased and consequently the demand for malt barley has also grown significantly reaching 65 thousand tons per year which is expected to increase further with the ongoing expansion of old breweries and the establishment of new ones. Due to poor quality of locally produced malt barley, domestic production of malt grain covers only 38% of total national demand. Inadequate supply of malt by the local malt factory (AMF), therefore, has remained a major production constraint faced by almost all the breweries. Consequently, all the breweries import most, if not all, of the malt they need and spend a considerable amount of the much-needed foreign currency, which could have been used for other development programs in the country. The gap between domestic supply and demand indicates an opportunity to enhance local production and substitute import through huge untapped malt barley potential in the country. Therefore, given the expanding demand due to increased capacities of existing breweries and those under establishment, there is a need for intensified research and development efforts along the malt barley value chain for increasing productivity, production and quality of malt barley in Ethiopia, without which, the country’s reliance on imports is likely to grow even further. The key areas identified by this study that need major emphasis in malt barley research for development include: scaling up and out of productive varieties, managing acidic soils, developing and implementation of optimal agronomic practices for ensuring high malting quality, pest management, seed production and distribution systems, linking farmers to the market and favorable policies to boost malt barley production. These measures are believed to enhance the diversification of livelihoods in the barley-livestock based production systems of the highlands of Ethiopia and make substantial contribution to national economy through import substitution and possibly through export of malting barley grain.